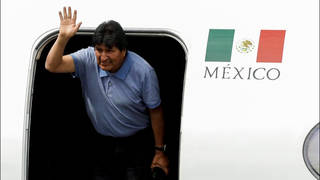 In Bolivia, right-wing Senator Jeanine Áñez declared herself president Tuesday night despite a lack of quorum in Congress, amid a deepening political crisis in the country. Evo Morales, Bolivia’s first indigenous president, left the country Monday after being granted asylum in Mexico. Morales announced his resignation Sunday shortly after the Bolivian military took to the airwaves to call for his departure. His Movement Toward Socialism party is refusing to recognize Áñez as president, calling her claim illegal and decrying Evo Morales’s resignation over the weekend as a military coup. Last month, Morales was re-elected for a fourth term in a race his opponents claimed was marred by fraud. He ran for a fourth term after contesting a referendum upholding term limits. On Tuesday, the Organization of American States held an emergency meeting in Washington, where U.S. Ambassador Carlos Trujillo read a statement from President Donald Trump applauding Evo Morales’s resignation and warning it should “send a strong signal” to Venezuela and Nicaragua. Mexico, Uruguay, Nicaragua and the president-elect of Argentina have all denounced Morales’s departure as a coup. Morales’s departure has sparked demonstrations and clashes across Bolivia. We host a debate on the political crisis in Bolivia with Pablo Solón, former ambassador to the United Nations under President Evo Morales until 2011, and Kevin Young, assistant professor of history at the University of Massachusetts at Amherst and the author of “Blood of the Earth: Resource Nationalism, Revolution, and Empire in Bolivia.”

The ongoing coup attempt by the United States-backed opposition in Bolivia has reached boiling point. Sections of the police have declared mutiny and far-right protesters attacked and shut down the government’s media outlets, assaulting its journalists. Now new elections have been called by the Bolivian government in an attempt to defuse the situation.

Beyond the fast paced developments, it’s necessary to understand the politics and background to this coup attempt, which has now undertaken a dramatic shift to the right as fascist elements within Bolivia’s right wing opposition come to the fore.

There is now an increasingly clear rupture between the minority of more moderate voices, and the fascist rhetoric of Fernando Camacho, the Santa Cruz caudillo (political leader), who has emerged as the new leadership of the right wing protest movements that seek to annul the democratic results of Bolivia’s recent elections that gave a clear victory to Morales and his Movement Towards Socialism (MAS) coalition on October 20. However, the resistance to the coup, led by indigenous communities and trade unions, has also stepped up and proved itself capable of keeping the far right at bay.

Carlos Mesa, the neo-liberal centrist candidate who came second in October’s Presidential race with only 36% of the vote, has now lost the media spotlight to far right politician Camacho, leader of the “civic committee” of Santa Cruz, the most right wing region of the country, with a history of racism against the country’s indigenous majority, the last flare up of which was the 2008 “Media Luna” coup attempt that saw a wave of racist violence carried out by the “civic” and “youth” groups that are taking a leading role in the protest movement today.

The extent to which Mesa has lost control was laid bare on November 6 when an important opposition rally was held in La Paz. Camacho led this event and Mesa was not even present. The chant “neither Evo nor Mesa” is now common at opposition protests.

Camacho and the Civic Committees are now the leadership of the opposition protests and their politics are unambiguously extremist and fascistic. Unlike Mesa, Camacho has taken a maximalist position, meaning he does not believe in holding a second round, or holding fresh Presidential elections, he calls instead for the immediate fall of the government and the passing of state power to the supreme court until new elections can be held at which Morales would be barred from running.

At the mass rallies that he has led in Santa Cruz, he always holds up a bible and recently announced that he “is going to restore God to the Presidential palace, from where he has been taken out [by Morales]”. Religious conservatism has been a common theme for his movement. The civic committee’s last high profile protests were in 2016 against the extension of LGBT rights under Morales’ Gender Identity Law that allowed trans citizens to change their gender on official documents.

Those loyal to Camacho’s civic committees have been carrying out egregious violence, mostly against indigenous women during the recent protests. One woman in Santa Cruz was attempting to pass an opposition roadblock on her way to visit the local cemetery when she was “detained” in a toilet and threatened with being burnt alive for being a “masista” (government supporter) and a “colla” (a racist term used against highland Andeans). She was eventually released after being forced to get on her knees and “apologise” to the right wing protesters as they filmed it.

Another, woman, Patricia Arce the elected socialist mayor of Vinto (a town in the Cochabamba department) was kidnapped, beaten, covered in red paint and had her hair cut off then paraded through the streets barefoot by opposition protesters, before being rescued by police.

Her words, whilst still being held captive, were caught on film and serve as an example of the bravery of the working class and indigenous Bolivians who have resisted the coup thus far, she said, “I’m not afraid of you, I tell the truth. This is a free country and I’m not going to be silenced. If you want to kill me then kill me…I’ll give my life for this process of change”.

This level of violence was previously seen in Bolivia in 2008 during the Media Luna coup attempt, but at that time it was restricted only to the eastern regions of the country, that were demanding autonomy from the central state. However, this time, the Santa Cruz based far-right have taken leadership of a movement that spans the entire country.

At a rally on November 7, Camacho was joined by Waldo Albarricin (former centrist who now calls for the armed forces to join the coup), leading figure of the opposition in La Paz, and Marco Pumari, leader of the Potosi (Andean department) civic committee, who proclaimed jubilantly from the stage that “Camacho will make the heretics read the bible!”  This right-wing opposition in the Andean regions formerly opposed the racism of the Cruceno elites, but have now cast Mesa’s centrism aside and lined up behind Camacho’s religious extremism.

Morales responded to this sudden resurgence of political Christianity, saying on twitter, “Our Plurinational State guarantees freedom of worship, there is no longer any religions given primary or secondary importance, it’s sad that religion is being used to organise mobilisations of racism and discrimination. Religion is reconciliation and blessing…”

The response of the Bolivian government has been extraordinarily hands off. The police have been given orders to not lift the opposition “bloqueos” (where protesters block roads indefinitely, these have been concentrated in the wealthiest and whitest areas of the large cities). These bloqueos are entering their 17th day, paralysing traffic circulation in upper class districts such as San Miguel and Calacoto in the Zona Sur of La Paz.

Those resisting the coup in the streets have not been the forces of the state, but rather trade unions and indigenous communities. Miners and rural workers have flooded into La Paz and maintained a permanent presence outside the Presidential palace, so as to stop right-wing forces from seizing it, something opposition protesters have attempted to do.

The indigenous popular city of El Alto has come in swinging for Morales’ government this week, holding a number of mass rallies at which social movements pledged resistance to coup.

Despite the hands off approach of the state, the opposition claims they are suffering repression due to clashes between them and protesters who support the government. In some places intense fighting has broken out between both sides. In the town of Montero, known as a government stronghold, truck loads of oppositionists from Santa Cruz were brought in to attack “masistas”.

Heavy fighting broke out between local residents and the oppositionists that resulted in two deaths of opposition protesters, and a scenario took place in Cochabamba that resulted in the death of one. The government has formally condemned violence of both sides in such confrontations and arrests have already been made. Nevertheless, the opposition are equating outbreaks of street fights to police/military repression.

The threat of the US government taking measures against Bolivia remains present, with war hawk and US Senator Marco Rubio himself issuing “warnings” to Morales.

Though the Bolivian government hope that they can pull through this conflict and avert the sanctions and intervention that have been imposed on Venezuela and Nicaragua, it is in pursuit of this that they have given all manner of concessions to the right wing.

These past few weeks have proven the futility of trying to reason with coup plotters – the opposition are not a democratic force and have rebuffed every attempt at a peaceful negotiated solution that the Bolivian government have proposed. The government’s supporters have mobilized en masse to resist the coup and defend Morales’ recent election victory. They are demanding that the coup be quashed once and for all.

The stakes involved in this struggle are huge. The US and Bolivia’s right-wing opposition are not prepared to accept the legitimate re-election of Morales and seek to reverse the tremendous economic and social transformation of the country that this socialist movement has achieved since it first came to office in 2006.

The US are attempting to make all of Latin America its “backyard” again and Bolivia is its next target. Progressive people across the world must stand with Bolivia against the coup plotters and the attempts of the US to destabilise the country.