The US was battered by 20 separate billion-dollar climate and weather disasters in 2021, one of the most catastrophic climate years on record which led to at least 688 deaths, according to the annual report of the National Oceanic and Atmospheric Administration (NOAA).

Damage from the year’s 20 most costly disasters, which included thousands of wildfires burning across western states, frigid temperatures and hail storms in Texas, tornadoes in the south-east, and tropical storms saturating the east coast, totaled around $145bn. Green lending is showing the classic signs of a financial mania

A small group of climate activists has established an encampment near President Joe Biden’s private home in Delaware where they are demanding he declare a national climate emergency and immediately order the end to fossil fuel development in the United States.

Establishing the camp on Christmas Day and sleeping overnight in tents or cars on a roadside area not far from the family’s Wilmington residence, the campaigners operating under the “Occupy Biden” banner say if the president truly recognizes that the world is in a “code red” situation when it comes to soaring global temperatures then he must act accordingly.

“The president has the power to declare a climate emergency, but has not done so,” said Echo Alford, a local resident and member of the Party for Socialism and Liberation, in a statement Thursday. “The president knows that we are occupying land right outside his home, but he hasn’t addressed us or our demands.”

Earlier this week, some of the activists invoked the blockbuster film Don’t Look Up — currently among the most viewed movies on Netflix and which satarizes humanity’s inaction in the face of the climate threat — to argue that fictionalized version is not far from the what’s really happening:

@LeoDiCaprio @JLawrence_RepUs we watched the film this week at @OccupyBiden! We’re occupying land in @POTUS’s neighborhood all week to put pressure on him to take #ClimateActionNow. Can you please support our cause?#DontLookUp #OccupyBiden pic.twitter.com/ga783bZWZE

With Democrats in control of the House, Senate, and White House, added Alford, “they have the power to enact sweeping change to protect our earth and our futures, but they haven’t. I stand in solidarity with this multigenerational working-class movement for environmental justice because this inaction by lawmakers is inexcusable.”

With the Democrat’s signature climate legislation contained in the Build Back Better Act now stalled in Congress, the activists say that grassroots pressure must be intensified to ensure the opportunity to take meaningful action is not lost.

Karen Igou, the small business owner and founder of Extinction Rebellion Delaware who is lead organizer of the encampment, said the stakes are too high for inaction to be accepted. “Our youth are scared, angry, and smart,” Igou said. “They know we could do better and they demand that we do so now. If our government does not do all in their power to stop our climate emergency then, I believe, they are committing genocide on our grandchildren. The scientists have stated our dire situation. The [International Energy Agency] has stated it. And Build Back Fossil Free has a Biden Executive Blue Print that he could be following, but is not.”

The group is planning a New Year’s Day rally on Saturday to lift up their demands.

“I am here, all day and all night, from Christmas morning to New Year’s Day, sleeping in a car, because of what our president said is a worldwide, ‘code red’ emergency situation,” said Ted Glick, a veteran activist whose has written books on the climate crisis. “When it’s ‘code red’ you do things you’ve never done before. I and others here are doing that. President Biden must too, using the powers he was elected to use.”

Read more
The time has come for drastic measures to protect the environment and save the world from a climate catastrophe.
Read more
Latest analysis by World Wildlife Fund warns humanity—possible “victim of it own lifestyle”—might ultimately be added to list of threatened species.
Read more
The study’s authors say the likelihood of higher-latitude tropical storms fueled by human-caused global heating “poses profound risks to the planet’s most populous regions.”
Read more 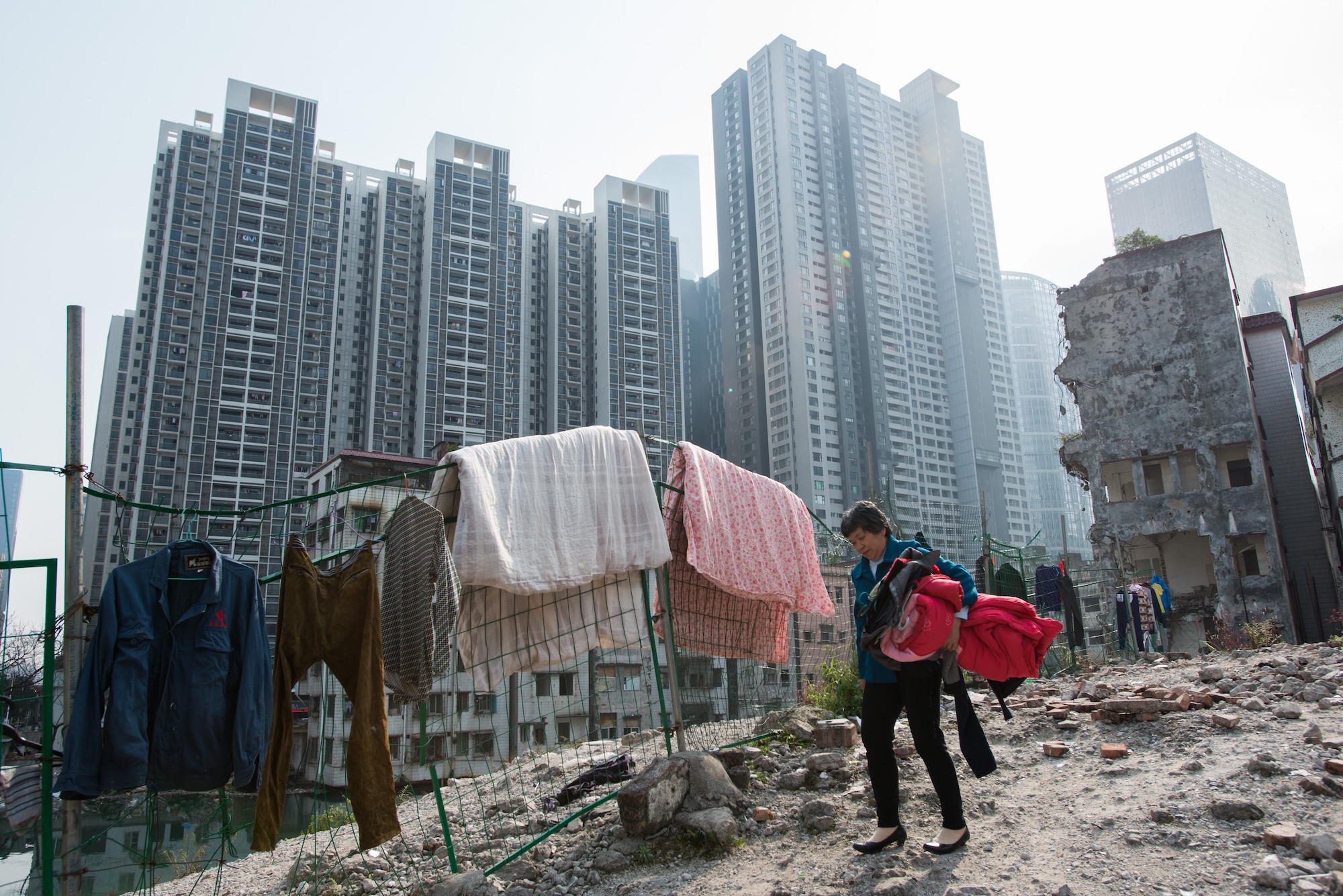 A recent analysis led by several Nobel-laureate economists has put concrete numbers to the “emissions inequalities” around the world. The richest individuals, it found — the world’s “10 percent”– collectively emit nearly half of all global emissions. Meanwhile, the poorer half of the global population is responsible for just 12 percent.

The report, produced by the research group World Inequality Lab, based at the Paris School of Economics, maps the differences in global income and wealth across the world, as well as gender and environmental disparities, using data collected by more than 100 researchers over four years.

“There is a fundamental problem in contemporary discussion of climate policy: It rarely acknowledges inequality,” Lucas Chancel, the study’s lead author, wrote in The Guardian.

The United States, it found, is a “super emitter” of carbon dioxide, given its energy mix and consumption habits, with Americans, on average, emitting three times more carbon than the rest of the world. And for some regions, the disparities are even greater: an average American emits 21 tons of CO2 every year, for example, compared to a person in sub-Saharan Africa, who emits just 1.6 tons.

But when the researchers analyzed the emissions created by low-income people versus the middle class and wealthy within various regions, they found that “this is not simply a rich-versus-poor countries divide: There are huge emitters in poor countries, and low emitters in rich countries,” Chancel wrote.

Wealthy people in East Asia and the Middle East, for example, emitted more CO2 (around 39 and 34 tons in 2019, respectively) than the poorest people in Europe, who emitted 5 tons per person that same year. Moreover, the consumption habits of the wealthiest people in those countries have even made them more polluting than the most affluent Europeans, who are responsible for 29 tons of carbon dioxide every year.

Within the U.S., the difference between the upper 10 percent and the lower half is stark. While the richest Americans are the highest emitters on Earth, releasing 75 tons per person each year, a low-income American emits about 10 tons over the same time period.

“An extreme illustration of this is when billionaires decide to do a nine-minute trip to space,” Chancel said in an email to Yahoo News. “Estimates suggest this adds 75 tonnes of carbon per passenger. It takes a lifetime for about a billion people on earth to reach this level of per capita emissions.”

Yet after analyzing the policy decisions that countries have taken to address climate change, the authors found that they have disproportionately affected the middle and lower classes.  In that sense, the report “enables a much richer consideration of what socially just climate policies should look like, both within and across countries,” noted Jayati Ghosh, an economist at the University of Massachusetts Amherst who was not involved in the report, in an op-ed in Project Syndicate.

Instead of approaches like a generalized carbon tax, that tend to overburden people who already are struggling to make ends meet, the authors propose measures like a wealth tax, with a pollution top-up; or establishing individual carbon rights, similar to water rights in countries or regions where this resource is scarce. The authors also advocate for measures that address the root of the problem: the existing legal and taxation regimes that allow such intense concentrations of wealth.

“[The report] is much more than a valuable compendium of useful data and analysis,”​​  wrote Ghosh. “[It] reflects human choices, which means that it can be changed by making other choices.”

This story was originally published by Grist with the headline The wealthiest people on the planet are responsible for almost half of carbon emissions on Dec 17, 2021.