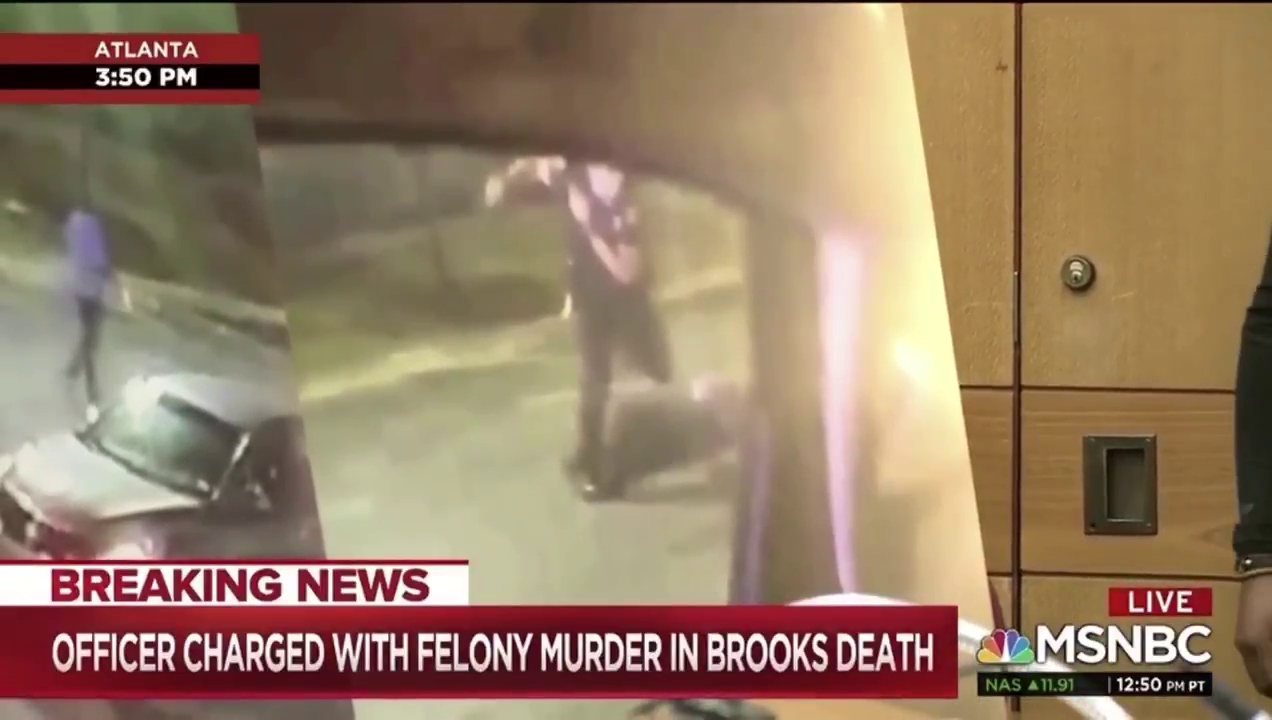 Both officers involved in the shooting death of Rayshard Brooks, the unarmed man sleeping in his car at a Wendy’s fast food drive-through restaurant, were just formally charged in his death.

Video footage shows that Brooks wrestled with the police when they attempted to handcuff him and that he did take one of their tasers, which was useless since it had been fired twice. He then ran away. An autopsy confirmed what was on video – he was shot twice in the back as he ran away and posed no threat to the officers.

“At no time was Mr. Brooks ever a threat to anyone,” said his attorney after hearing the DA lay out the charges.

The first officer, Garrett Rolfe, was charged with eleven individual charges, the most serious being Felony Murder. The video and photos brought even more horrific details to light than initially knew – not only did he know that the stun gun that Brooks had taken was non operational, but he kicked him in the head after he was shot and was laying on the ground, dying. Officer Rolfe has already been fired.

The other officer, Brosnan, will be charged with three individual charges, the most serious being Aggravated Assault. It was reported during the press conference that Brosnan is already a cooperating witness. Brosnan remains on the force and has been placed on administrative leave. 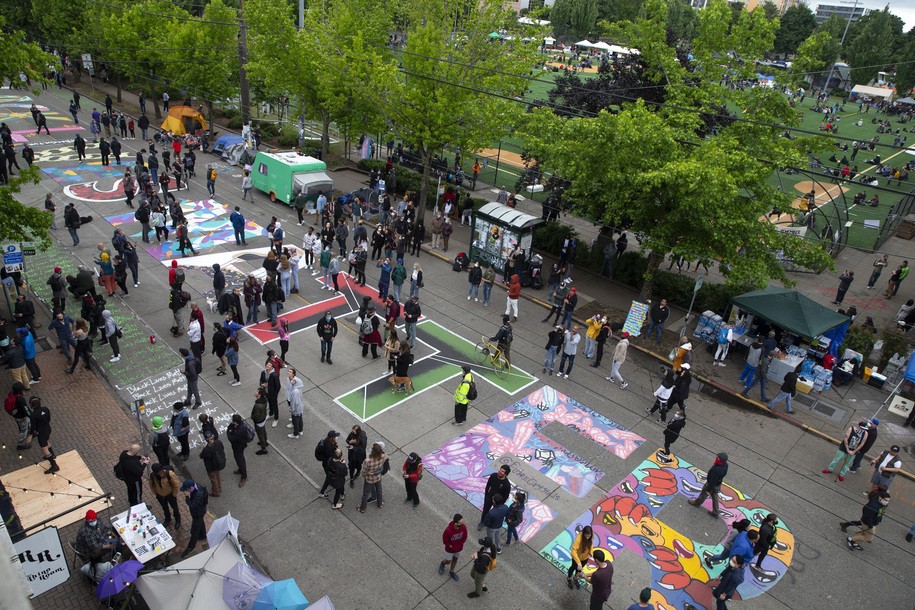 For days, Donald Trump has been tweeting about the “anarchist take over” of Seattle. According to Trump, the city is being “pillaged” by “terrorists” who are murder-burning their way across the city. These “armed lunatics” have “taken over a major American city,” and what frustrates Trump most is that the mayor and governor don’t even seem to know that their city is missing. In addition, the media is conducting a “total blackout on the insanity” in Seattle. Trump has ordered Mayor Jenny Durkan to “take back the city fast” and promised that if they don’t do something, he will!

The “autonomous zone,” formed by peaceful protesters in a small area of Seattle’s Capitol Hill neighborhood, has been described by Durkan as an example of free speech and genuine patriotism; and by The New York Times as “part street festival, part commune.” But what viewers of Fox News and other conservative media are seeing is something very, very different. Across conservative media, Seattle is being portrayed as a city in chaos, under siege, and simply burning. Where are conservative outlets getting this? Easy … they’re making it up. 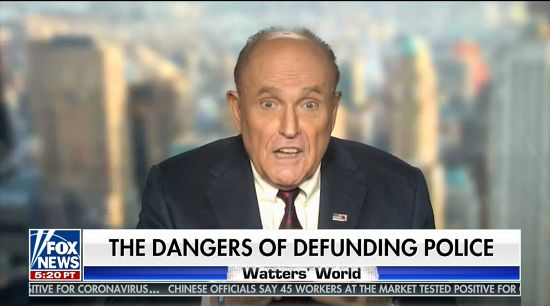 Fox News has gone gaga over Seattle’s protests, painting all protesters with their small brush of anarchy while ignoring the racial outrage that has captured the country, but is still lost on Trump. This in turn makes it lost on Fox News.

Rudy Giuliani has been relatively quiet after being caught setting up a shadow government to force Ukraine to smear the Bidens which led to Donald Trump being impeached by the House.

But once the police are involved Rudy comes out of the woodwork like a cockroach to spew anti-Semitic Alex Jones-type conspiracy theories about Antifa and George Soros.

Speaking to the second-biggest presidential fluffer outside of Pete Hegseth on Fox News, Jesse Watters, Rudy pretended that the George Floyd protests have nothing with at all to do with the police murdering nonviolent and cooperating Black men.

Giuliani first opened up saying there was an insurrection in Seattle and Miami and they both blamed liberals for the outburst and not the police. There isn’t an insurrection.

Rudy tried to compare ‘autonomous zones’ to the Civil War, calling it a minor version of that major conflict in American history.

The Civil War was about slavery, assh*le.

Watters stated the police needed to stop these protesters in their tracks now or they will go for everything. What is everything?

The two then went deep into the Alex Jones racist and anti-Semitic One World government trope that Neo-Nazis love to espouse.

In rural towns across America this past week, men with guns have been roaming the streets, looking out for the threat to their homes they were warned about on Facebook: hordes of ravening “antifa” activists, loaded en masse onto buses and intent on wreaking havoc. Local sheriffs jumped on the bandwagon, too. Nevermind that it was all a hoax.

In at least one case, a suspected “antifa bus” (actually occupied by a multiracial family of four, out for a camping excursion) was surrounded in a parking lot and chased out—then later harassed at their campsite by locals felling trees across their access road in order to trap them.

The hoaxes were primarily spread on Facebook, though some Twitter accounts relayed the fake information as well. A typical post followed the formula used in others: a claim to have “real information” about “antifa” piling into buses from nearby urban centers with the intent of attacking defenseless small towns. 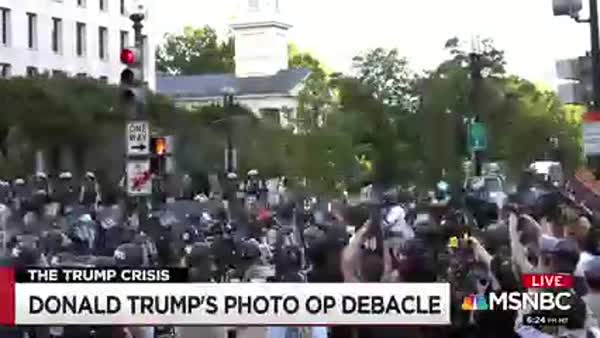 On Monday Chris Hayes interviewed Dexter Filkins regarding the huge pushback from the US military against Trump’s desire to unleash soldiers on Black Lives Matter protestors. 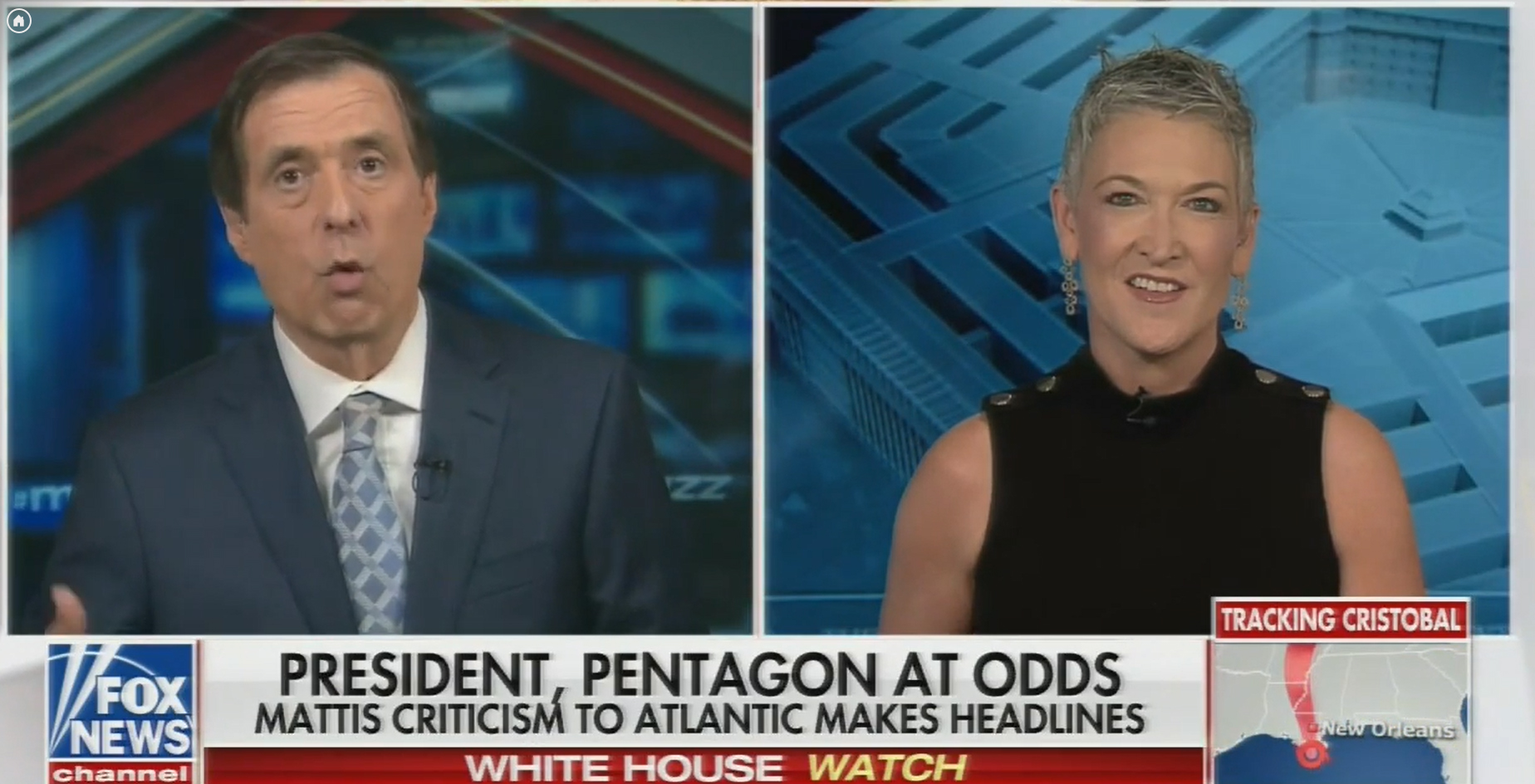 Howard Kurtz set up the segment by telling us how after General James Mattis wrote a scathing op-ed denouncing Trump’s actions, Trump tweeted (of course) that his former Secretary of Defense is “the world’s most overrated general.”

Kurtz asked how unusual it is that General Mattis chose this moment to tell the Atlantic Magazine that Trump is a divider and not a uniter.

Griffin responded that it was “extremely unusual.”

She continued, “There’s been a lot of soul-searching here at the Pentagon at the highest levels among active-duty four-star generals and others about how to handle this week’s actions by the president’s and the threat to use the military in the streets against protesters.”

“In my 13 years here, I’ve never seen so many former or current members of the military speak up against a sitting president,” Griffin said. 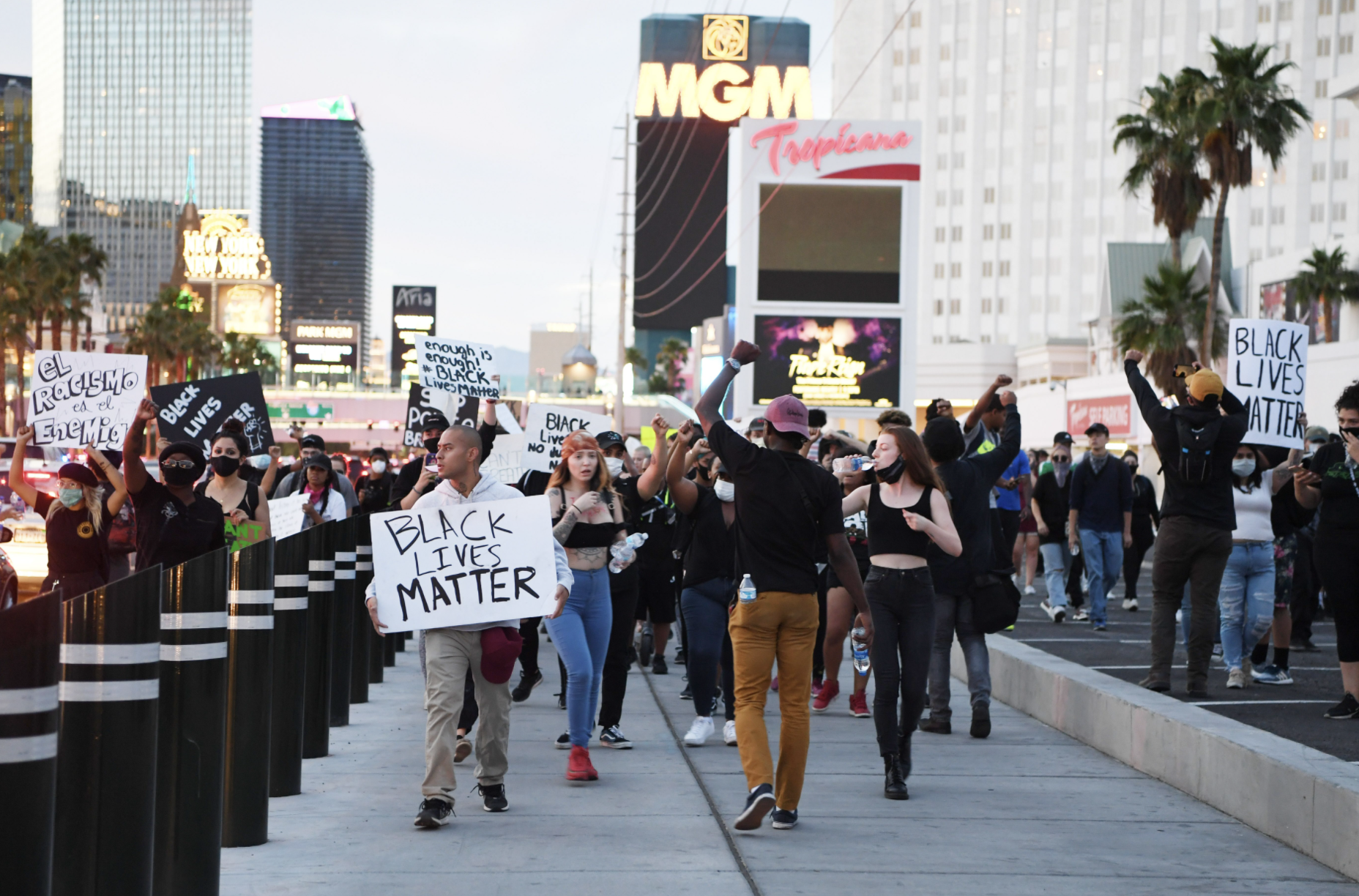 Three “Boogaloo Bois” had big plans for Saturday in Las Vegas. They stopped off at a gas station en route to an anti-police protest over the death of George Floyd, and filled up a gas can. They had begun making the Molotov cocktails they intended to launch into the crowd of protesters when they suddenly found themselves surrounded and arrested.

The men, all with military backgrounds and a devotion to far-right “Boogaloo” memes, were charged Wednesday by federal authorities with plotting to attack the protest in order to further their hope for a civil/race war, Nevada U.S. Attorney Nicholas Trutanich announced.

“Violent instigators have hijacked peaceful protests and demonstrations across the country, including Nevada, exploiting the real and legitimate outrage over Mr. Floyd’s death for their own radical agendas,” Trutanich said. “Law enforcement is focused on keeping violence and destruction from interfering with free public expression and threatening lives.” 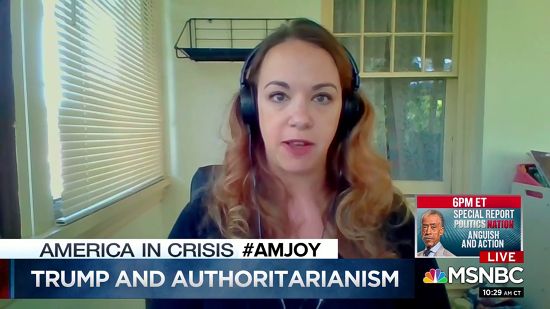 Sarah Kendzior is an author and journalist who’s been railing against Trump since she transitioned to covering the presidential election in March 2016. Kendzior is an expert on authoritarian states and saw in Trump all the classical symptoms of that manifest itself in one man. Her early writings were criticized by some for being hyperbolic and over-the-top, especially in regards to the checks and balances that were supposed to be in the American system of government. Someone as bad and as inept as Trump surely couldn’t do too much damage before the system would right itself was the argument at the time. Well, that turned out to be a farce and Trump has basically run roughshod over ever norm of the presidency and promises to do much worse if re-elected.

This morning she spoke with Joy Reid and Malcolm Nance about Trump’s and his (not our) Attorney-General William Barr and their recent efforts to turn the United States into a police state.

JOY REID: I don’t know if there’s anyone more sinister in the administration than William Barr, first of all. You had senator Chris Murphy and others call this division controlled by Bill Barr a secret police force. is that what we’ve come to in America? 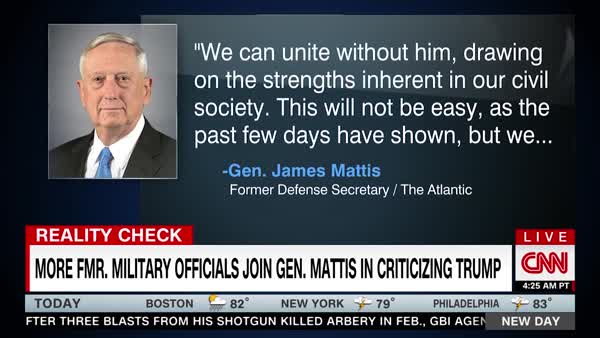 “General James Mattis dropped a bombshell this week saying, ‘Donald Trump is the first president in my lifetime who does not try to unite the American people, doesn’t even pretend to try. Instead he tries to divide us. We’re witnessing the consequences of three years without mature leadership.’

“Now, the tipping point was apparently Trump’s autocratic stunt of violently dispersing a peaceful protest for a photo-op with a Bible as a prop. It sparked an unusual firestorm of dissent with respective military and national security figures who’ve been trained to remain silent on political matters. Former Chairman of the Joint Chiefs Martin Dempsey wrote on Twitter, ‘America is not a battleground. Our fellow citizens are not the enemy.’ Bush and Obama-era chairman of the Joint Chiefs Admiral Mike Mullen wrote, ‘Whatever Trump’s goal in conducting his visit, he laid bare his disdain for the rights of peaceful protest in this country.’ Retired Marine General John Allen said, ‘Trump’s threats of military force may be the beginning of the end of the American experiment. Former CIA analyst Gail Helt told the Washington Post, ‘This is what autocrats do.’ 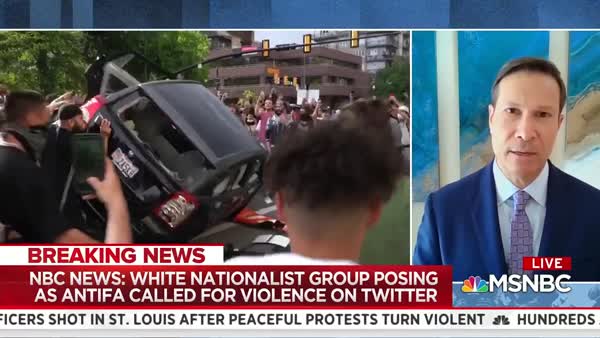 Bill Barr and the Trump administration would have you believe that the only people responsible for looting and vandalism and violence against people are members of Antifa and/or the political left. Remember also that they instructed us out loud not to believe what we see and hear with our own eyes and ears. They would know, since they refuse to publicly believe that Russia interfered with the 2016 election, or that Trump obstructed justice in any way shape or form. This sets the stage perfectly for what is going on now in the streets and on social media platforms like Twitter.

Thankfully, Twitter is slowly opening its eyes and disregarding Trump’s directive. Twitter suspended an account created by white nationalists associated with the group Identity Evropa, because not only were they calling for violence in the streets at the protests against police brutality — they were posing as members of Antifa as they did so. Why set up, as Nicolle Wallace calls them, “Trump’s favorite target?” She asked former FBI assistant director for counterintelligence, Frank Figliuzzi, to speak to this complicating and dangerous strategy.