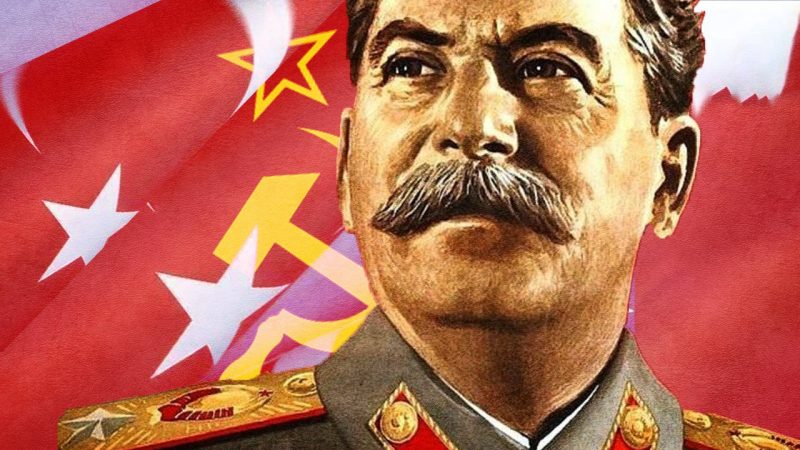 Just pure vile evilness from Rasmussen, and incredibly irresponsible. No, Mike Pence does not have the power to subvert democracy by rejecting Electoral College results. And then they used that awful, but sometimes accurate quote when referring to authoritarian regimes like Putin’s Russia where subverting democracy is normal. We’re not them or Stalin’s Soviet Union. Not yet, anyway.

Supporters of President Trump have made similar arguments that Pence, as president of the Senate, has the power to reject Electoral College results.

However, the theory is based on a misreading of U.S. code that simply authorizes the vice president to call on states to submit their electoral votes if they do not do so by the fourth Wednesday in December, according to The Washington Post. 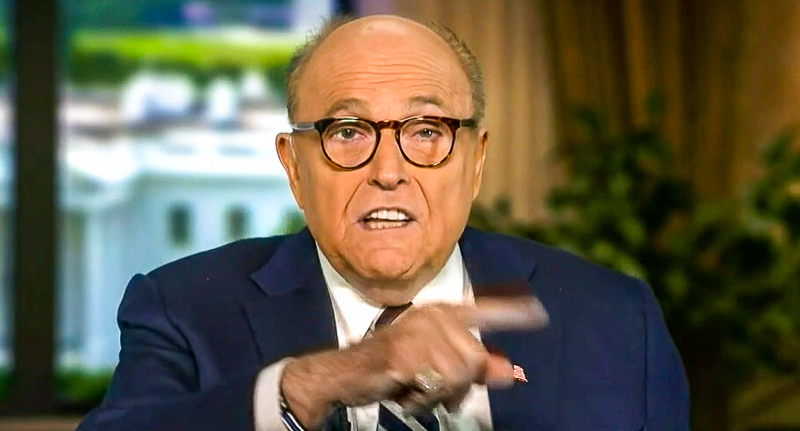 Earlier in the week voting machine manufacturers Smartmatic and Dominion let it be known to conservative conspiracy peddlers Fox News and Newsmax that they would likely be filing lawsuits after the “news” outlets promoted 100% fake, and known fake, claims about the voting machine companies somehow being in cahoots to cheat Donald Trump out of an election win. While the barrier to successfully suing even the worst news outlet is very high, experts suggested that both companies have a very strong case.

Now Dominion Voting Systems has followed up with a threatened lawsuit that might be even easier to prove. White House counsel Pat Cipollone and weird melting Trump bag man Rudy Giuliani have both been notified by Dominion that they must now “preserve and retain all documents related to” their false conspiracy claims against the company, and to expect an “imminent” lawsuit over their “defamatory claims.” 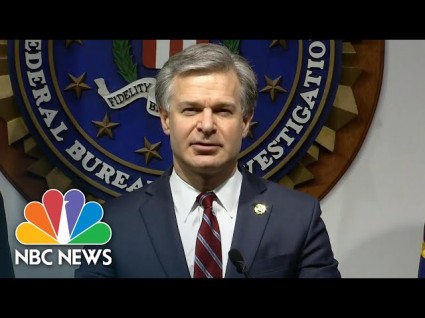 I’ll admit it, I was skeptical of the Iran conspiracy two months ago when it was first disclosed by DNI John Ratliffe. I assumed he was trying to downplay Russian election interference. My bad.

FBI Director Christopher A. Wray and ousted Homeland Security Department official Christopher Krebs were among more than a dozen people whose ­images, home addresses and other personal information were posted on a website titled “Enemies of the People.” Crosshairs were superimposed over the photos.

Many of these officials in one way or another have attested to the security of November’s election, saying they had not seen evidence of widespread fraud — a conclusion at odds with Trump’s baseless claims that the election was rigged.

“The following individuals have aided and abetted the fraudulent election against Trump,” the website falsely claimed.

Back in August, intelligence officials said Iran would focus on online influence and disinformation — which they apparently did: 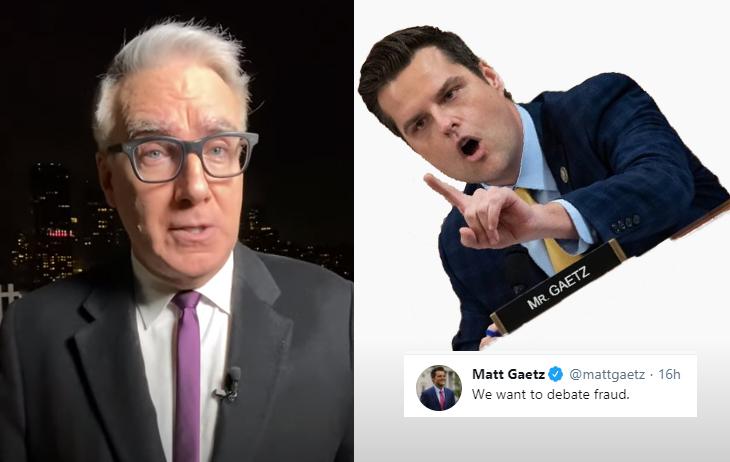 Keith Olbermann used his YouTube channel to list the names of people hanging out in the White House, plotting with Trump to overturn the results of the 2020 election.

Matt Gaetz was on the list. Matt retweeted Keith and Cavuto’ed the whole thing.

We want to debate fraud.

They want to prosecute those who call for a debate.

And they call us the crazies. https://t.co/nqqgz8so0M

But what he and his fellow coup plotters are really doing, at best, is sowing distrust in the sacred institutions of voting, election results, and the peaceful transfer of power.

There is no “debate” that Biden won with 80 million voters behind him, Matt. 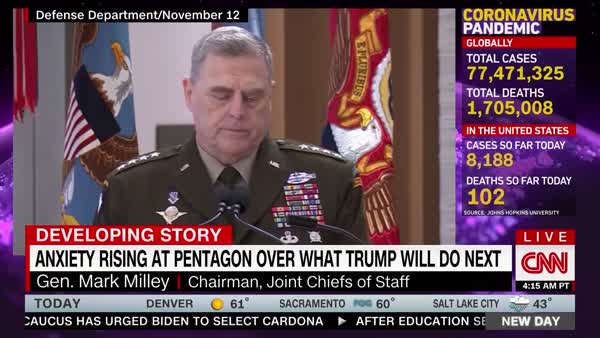 “I talked to a dozen officers or so. Some in the Pentagon, some in other areas, and they all are expressing the same concern. The conversation is the same and it goes something like this: We don’t know what he might do. This is their commander in chief. and they are concerned,” Starr said.

“The concern is very clear, that the president might decide to use troops, the military, somehow, in his effort to overturn the election. The immediate question, of course, would be is how is any of this legal? But setting legality aside, why are they so concerned? Well, you know, Mike Flynn, the fired national-security adviser, former three-star army general, has now spoken publicly about using martial law, the prospect of it, and he has now met with the president.

She said Flynn’s actions were being noticed in military circles. 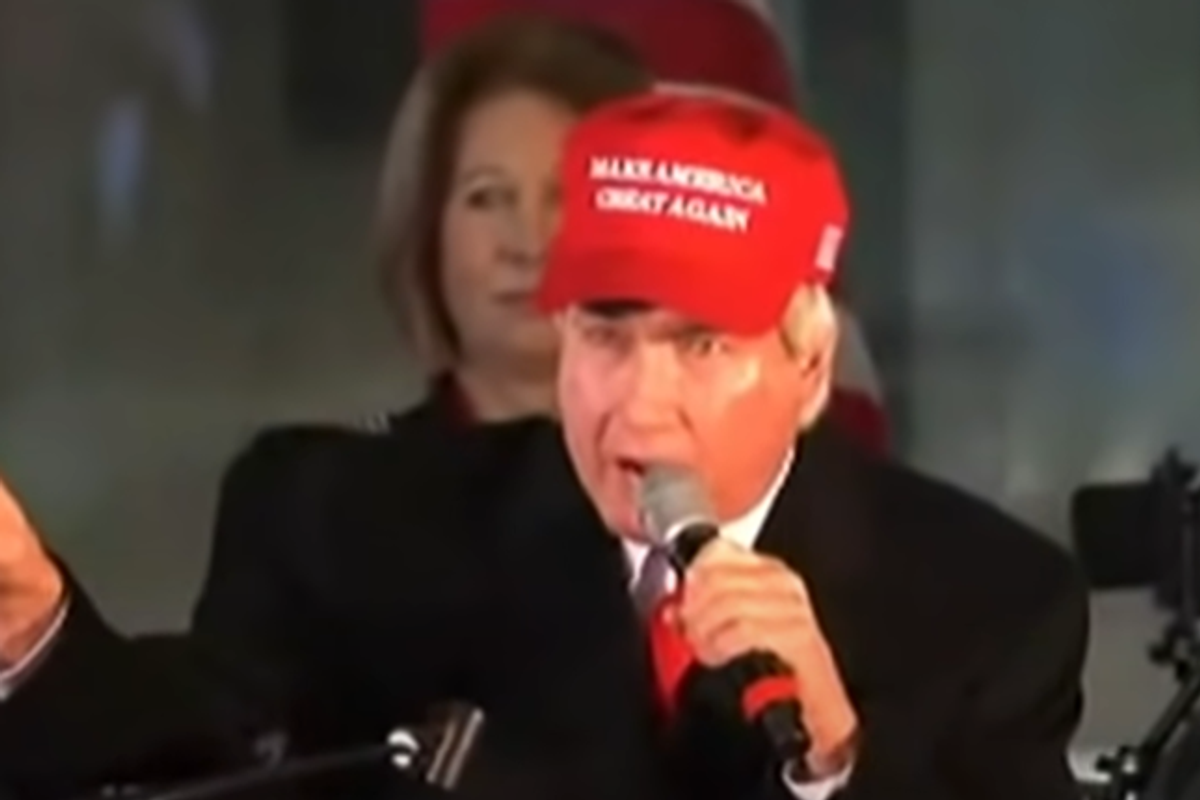 Election attorney Lin Wood on Sunday praised the idea that President Donald Trump could declare “martial law” in an effort to remain in office.

During an interview that was broadcast on NTP, a conservative YouTube channel, Wood was asked if martial law could prevent President-elect Joe Biden from being sworn in as the next president.

“I think Trump will Trump them all,” Wood proclaimed. “He’s also got the option of martial law. It’s been used 68 times. Lincoln had to do it to save the country. Maybe President Trump will have to do it.”

Wood explained that Trump could impose military rule on a “limited basis.”

“I’ve advocated the idea,” he continued. “Go into these seven states, seize the machines, have them tested, have the paper ballots tested. In a matter of days, our military could do it and we trust our military and we’d have the answer.” 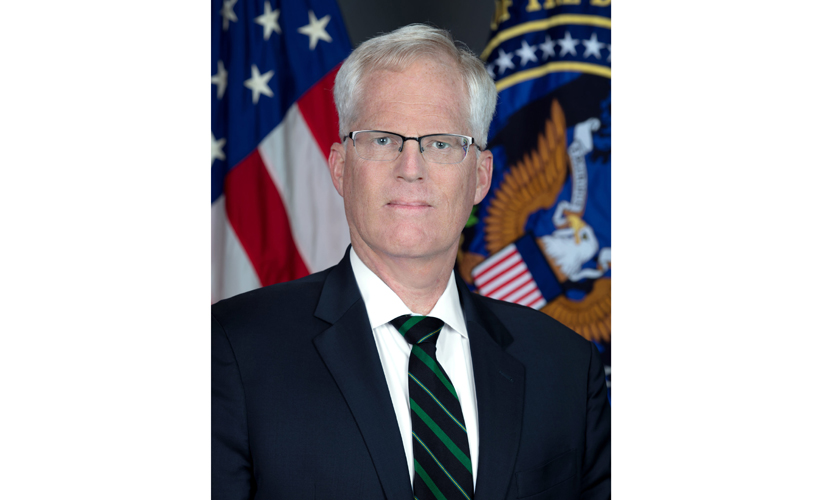 In another petty and dangerous move against The United States of America, the Trump administration cut off President-elect Joe Biden’s Pentagon briefings with no explanation.


As usual, the Biden transition team had no idea this was happening. Trump has basically abdicated his duty as the outgoing president except for rage-tweeting about the election he lost.

The U.S. just suffered a massive cybersecurity attack by Russia that apparently reached into our nuclear facilities.

The so-called president has said nothing about this attack to the public or the press, but he sure has a lot to say about non-existent “election fraud”.

Even supporters like General Keane wants to hear from the president on this breach by Russia, but instead Trump blocks President-elect Joe Biden once again. 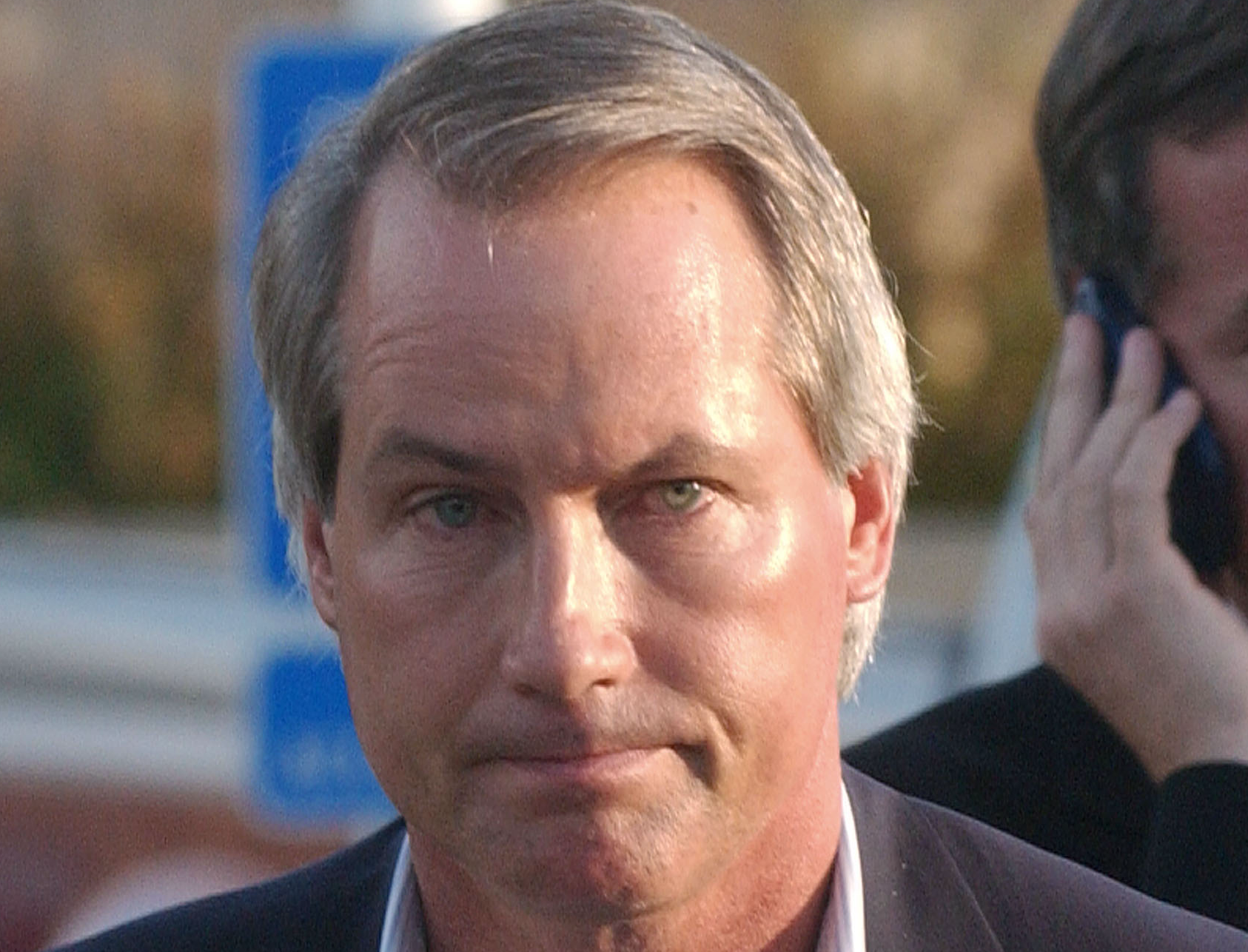 Trump election attorney Lin Wood’s seditious rhetoric has taken a dangerous turn, calling for Trump to declare martial law in order to keep the presidency. Wood further escalated that rhetoric earlier Monday when he tweeted out calls for so-called “patriots” to prepare and get ready for Trump’s instructions.

Lin Wood & Sidney Powell, having lost in federal & appellate courts, are now urging the president to sign an executive order declaring martial law to “clean up the election.” pic.twitter.com/JQfe60CQOC

Okay, it said “marital law” but you get the point, which he doubled down on earlier today:

If any member of public has refused to believe 11/3 election was fraud or has simply had head in sand, I believe Antrim report will remove blinders for ALL to see.@realDonaldTrump has massive evidence to order martial law & invoke EO on foreign interference with U.S. election. 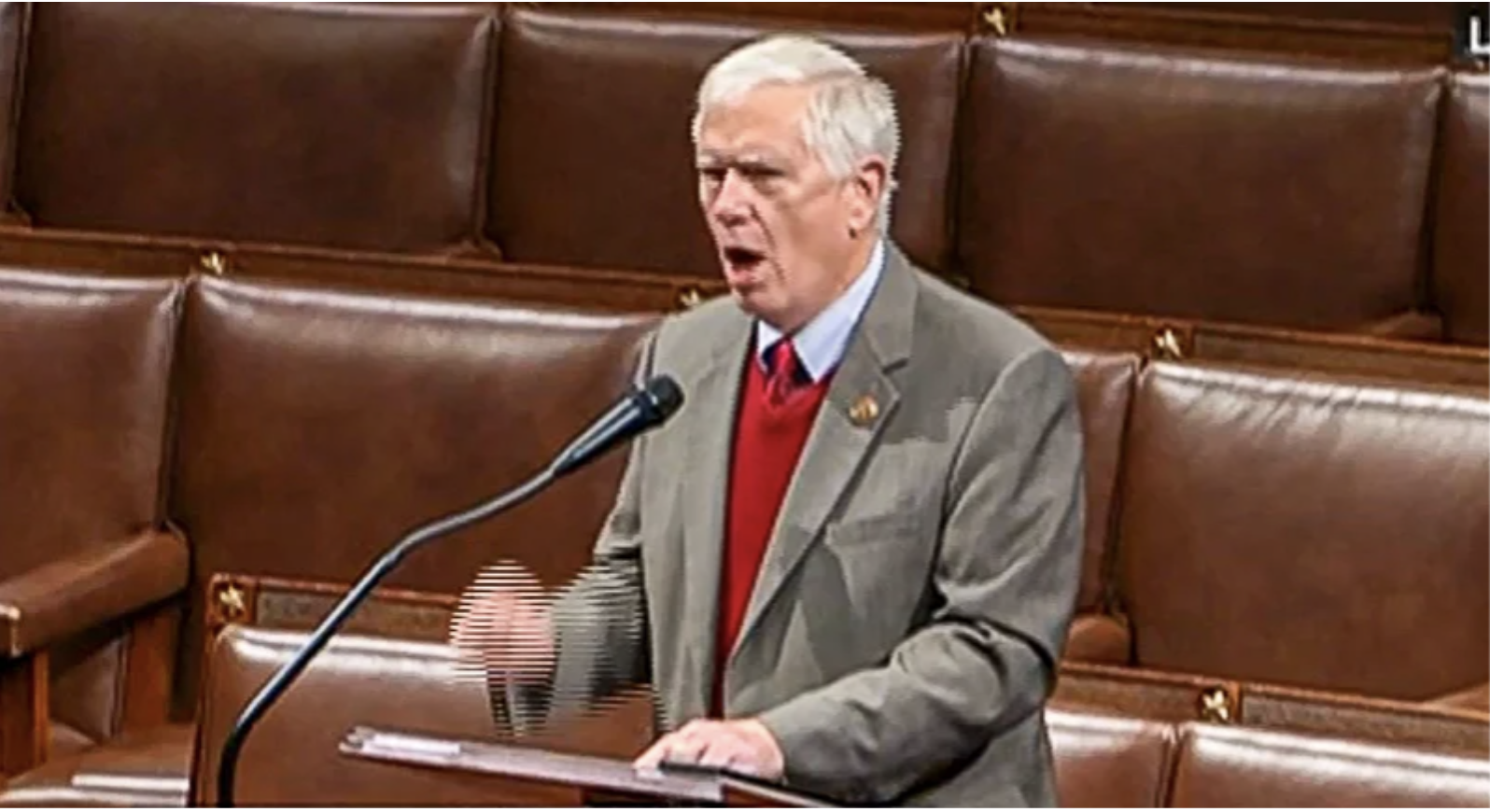 Rep. Mo Brooks (R-AL) on Tuesday unleashed a torrent of lies about the election in a speech on the floor of the U.S. House of Representatives.

Brooks argued that Congress had only authorized a “24 hour window” for voting and that most early and absentee votes are “illegal.”

“All en masse mail schemes promote voter fraud and elections schemes and are illegal!” Brooks insisted. “As such, all votes cast pursuant to these vote-by-mail schemes are illegal, void and should not be counted.”

“If only lawful votes cast by eligible American citizens are counted, President Trump won the Electoral College and a second term as president,” Brooks opined. “Congress can either support illegal voting, voter fraud and election theft or not.” 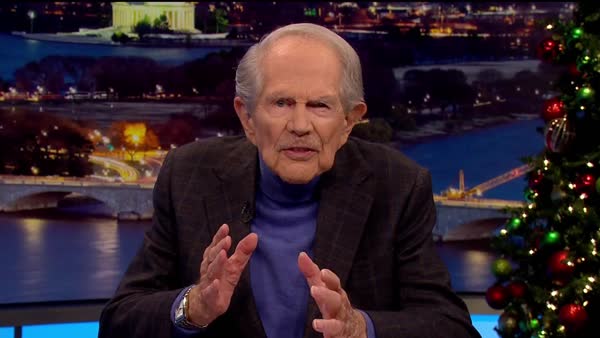 The 700 Clubs’ Pat Robertson played the Jesus card today and demanded that the Lord overturn the election in the name of Trump.

Robertson has been one of many useful idiots from the religious right who bowed down to Trump during his short-lived administration. On Monday, he claimed that the nonexistent voter fraud perpetrated against Trump “will not stand.”

Robertson then shared with his viewers that he knows about some secret option the Trump administration has to try and overthrow the election before the state electors certify the election results.

Robertson parroted Rudy Giuliani’s ridiculous legal team who claimed the ghost of Hugo Chavez infiltrated Dominion voting systems and changed the election from Trump to Biden. Shockingly, the conspirators didn’t change ballots for the rest of the Republican Congress.

“It sickens you and we have got to declare it, in the name of the lord, to say we declare in Jesus’ name, this fraud will not stand and it will be exposed and that the lord himself will intervene before this country turns into something socialist,” Robertson ranted.