By Jake Johnson at Common Dreams

A panel of leading scientists convened by the United Nations issued a comprehensive report Monday that contains a stark warning for humanity: The climate crisis is here, some of its most destructive consequences are now inevitable, and only massive and speedy reductions in greenhouse gas emissions can limit the coming disaster.

Assembled by the International Panel on Climate Change (IPCC) — a team of more than 200 scientists — the new report represents a sweeping analysis of thousands of studies published over the past eight years as people the world over have suffered record-shattering temperatures and deadly extreme weather, from catastrophic wildfires to monsoon rains to extreme drought.

The result of the scientists’ work is a startling assessment of the extent to which human activity, particularly the burning of fossil fuels, has altered the climate, producing “unprecedented” planetary warming, glacial melting, sea level rise, and other changes that are wreaking havoc in every region of the globe — wiping out entire towns, imperiling biodiverse ecosystems such as the Great Barrier Reef and the Amazon rainforest, and endangering densely populated swaths of the world.

“This report is a reality check,” said Valérie Masson-Delmotte, a climate scientist at the University of Paris-Saclay and co-chair of the panel that produced the report. “We now have a much clearer picture of the past, present, and future climate, which is essential for understanding where we are headed, what can be done, and how we can prepare.”

One central finding of the new analysis is that the Paris accord’s goal of limiting global temperature rise to no more than 1.5°C above pre-industrial levels is in serious danger as policymakers fail to take the necessary steps to curb greenhouse gas emissions.

Each of the past four decades, according to the report, has been successively warmer than any preceding decade dating back to 1850, atmospheric CO2 has soared to levels not seen in two million years, and “global surface temperature will continue to increase until at least the mid-century under all emissions scenarios considered.”

“Global warming of 1.5°C and 2°C will be exceeded during the 21st century,” the IPCC panel warns, “unless deep reductions in carbon dioxide and other greenhouse gas emissions occur in the coming decades.”

“However,” the report emphasizes, “strong and sustained reductions in emissions of carbon dioxide and other greenhouse gases would limit climate change. While benefits for air quality would come quickly, it could take 20-30 years to see global temperatures stabilize.”

Panmao Zhai, another co-chair of the IPCC working group, stressed that “stabilizing the climate will require strong, rapid, and sustained reductions in greenhouse gas emissions, and reaching net-zero CO2 emissions.”

“Limiting other greenhouse gases and air pollutants, especially methane, could have benefits both for health and the climate,” Zhai added. 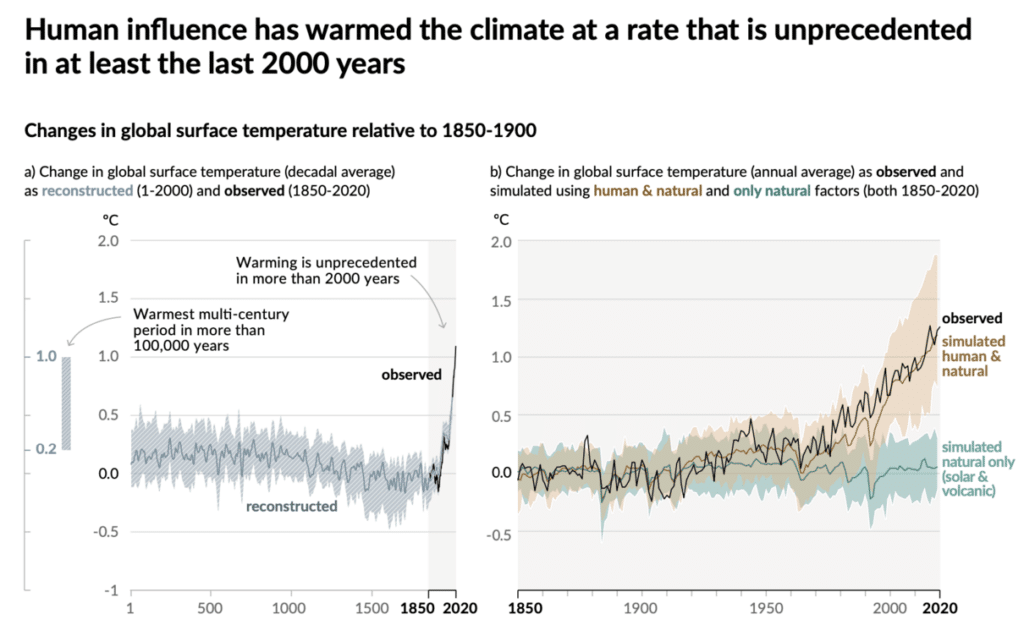 The planet has warmed at an unprecedented rate, the IPCC report states.

The new report, the first of three installments, was released just weeks before world leaders are set to gather in Glasgow for the 2021 United Nations Climate Change Conference (COP26), which activists view as a pivotal moment for the global climate fight.

“Many see COP26 as our last, best chance to prevent global temperatures from spiraling out of control,” Dorothy Grace Guerrero of Global Justice Now wrote last month. “Unfortunately, we are not yet on track to limit global warming to 1.5°C, the threshold that scientists agree will prevent the most dangerous climate impacts. Failure to reach this goal will take a disproportionate toll on developing countries.”

António Guterres, secretary-general of the U.N., said in a statement Monday that the IPCC’s latest findings are “a code red for humanity.”

“The alarm bells are deafening, and the evidence is irrefutable: greenhouse gas emissions from fossil fuel burning and deforestation are choking our planet and putting billions of people at immediate risk,” said Guterres. “Global heating is affecting every region on Earth, with many of the changes becoming irreversible.”

“There is a clear moral and economic imperative to protect the lives and livelihoods of those on the front lines of the climate crisis,” Guterres continued. “If we combine forces now, we can avert climate catastrophe. But, as today’s report makes clear, there is no time for delay and no room for excuses. I count on government leaders and all stakeholders to ensure COP26 is a success.”

This article was republished from Common Dreams under Creative Commons (CC BY-NC-ND 3.0)

A team of international lawyers has unveiled a definition of “ecocide” that, if adopted, would treat environmental destruction on a par with crimes against humanity.

After six months of deliberation, a panel of experts yesterday published the core text of a legal document that would criminalise “ecocide” if taken on by the International Criminal Court (ICC).

“This is an historic moment,” said Jojo Mehta, chair of the Stop Ecocide Foundation which commissioned the team of lawyers. “This expert panel came together in direct response to a growing political appetite for real answers to the climate and ecological crisis.”

In the draft law, the panel of 12 lawyers defined ecocide as “unlawful or wanton acts committed with knowledge that there is a substantial likelihood of severe and either widespread or long-term damage to the environment being caused by those acts”.

If ratified by signatory states, ecocide would become the fifth international crime investigated and prosecuted by the ICC, alongside genocide, war crimes, crimes against humanity and the crime of aggression.

During a webinar marking the release of the document, panel co-chair Philippe Sands QC said the proposed definition would “cause us to think about our place in the world differently and it causes us to imagine the possibility that the law could be used to protect the global environment at a time of real challenge”.

“None of our international laws protect the environment as an end in itself and that’s what the crime of ecocide does,” Sands added.

Mehta described the draft law as a “necessary guardrail that could help steer our civilisation back into a safe operating space”.

“Without some kind of enforceable legal parameter addressing the root causes of these crises, it’s hard to see how the Paris targets and the UNSDGs [United Nations Sustainable Development Goals] can possibly be reached,” she said.

The panel said that the idea of “unlawful or wanton” acts would allow judges and prosecutors to balance consideration of these elements. This idea of balance could be vital to the law’s success if it is to be agreed to by the states that subscribe to the ICC, according to co-chair Sands, who said it avoids “setting the bar too low and frightening states who we need to adopt the definition, or setting the bar so high that it becomes effectively useless in practice”. 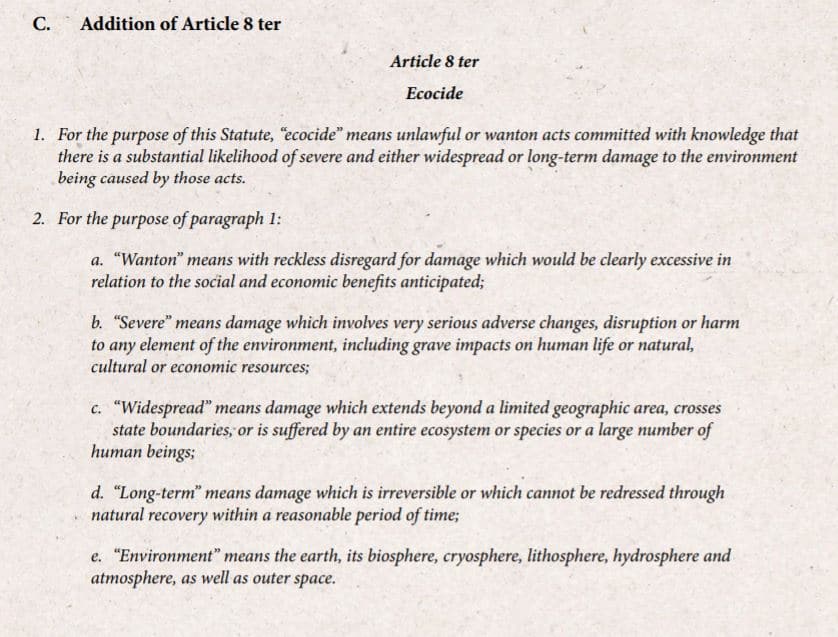 A team of lawyers published its proposed definition of ‘ecocide’ on June 22, 2021. Credit: Stop Ecocide Foundation.

Mehta acknowledged that ecocide legislation was likely to meet resistance from some richer nations, as it would inevitably force changes in corporate practice, “by making severe and reckless damage to nature illegal, and therefore unlicensable and uninsurable”.

This would close the door on “the old polluting ways”, she said. At the same time, Mehta argued, adopting ecocide legislation may be economically beneficial for stimulating innovation in green industries.

Sands said that oil spills, deforestation, and the authorisation of new coal fired power stations could all potentially be considered ecocide under the definition.

However, specific acts such as these were left out of the final document, Mr Sands said, as doing so could run the risk of unintentionally omitting certain practices from the definition.

“This is not about catching every single horror that occurs in relation to the environment, but those horrors that cross a threshold and are of international concern,” he said, adding that it would be up to prosecutors and judges to form a view on whether a particular act is ecocide.

The campaign to criminalise ecocide, a term which was first coined in the 1970s, faces a number of further obstacles, with the entire process expected to take at least four years.

As a next step, any of the ICC’s 123 member states can propose the core text as an amendment to the Rome Statute treaty, before the annual assembly holds a vote on whether it can be considered for future enactment. It will then have to be approved by two thirds of the member states to go ahead, ahead of it being adopted by individual members into national jurisdiction.