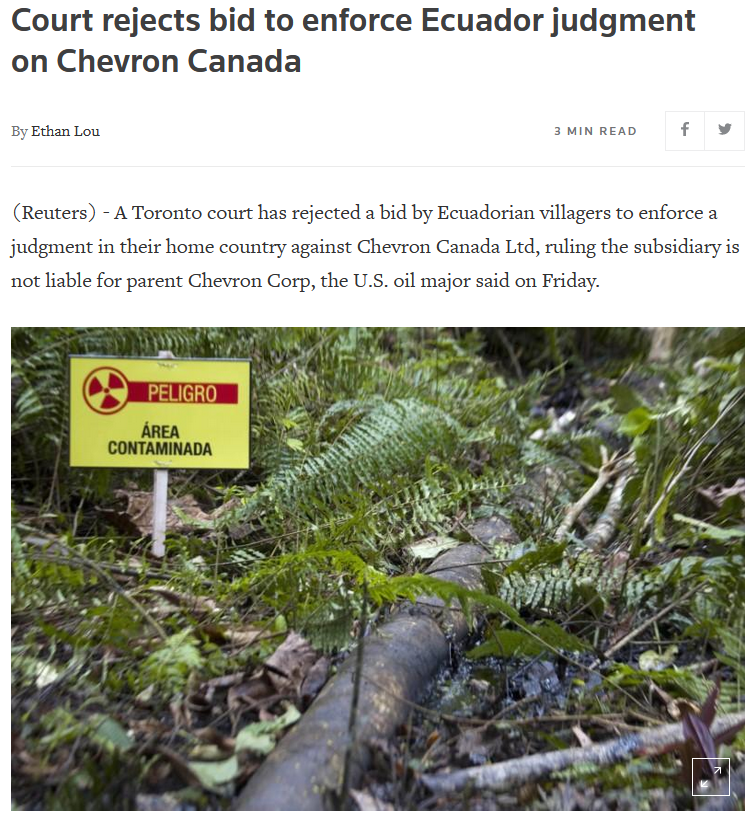 “While not disputing that pollution occurred, Chevron has alleged the villagers’ lawyer, Steven Donziger, and his associates went too far,” Reuters (1/20/17) reported.

The flagrant corruption and misuse of the legal system to abjectly serve corporate interests in the Donziger case illustrates the deep decay within our judiciary and democratic institutions.

One of those deeply decayed institutions is the corporate media, as a review of several years of Reuters coverage of the case illustrates.

Attorney Steven Donziger has been under house arrest since August 6 of last year. He is charged with contempt of court for refusing to turn over his cell phone and computer to Chevron as ordered by a federal judge. The order is still being appealed on constitutional grounds, one reason Donziger refused to obey it. Public prosecutors declined to take on this case, so the judge had a private firm (which had Chevron as a client) act as prosecutors. Donziger faces six months in prison, but told me his time under house arrest will not count as time served. He is being denied a jury, and a judge has even ordered Donziger to defend himself with a lawyer he does not want.

A lifetime of litigation against Big Oil

In 1993, Donziger, a recent graduate of Harvard Law School who played basketball with Barack Obama as a student, teamed up with other lawyers to file a lawsuit against Texaco in New York on behalf of Ecuadorian victims of pollution: thousands of villagers, largely Indigenous, from the Ecuadorian Amazon. The oil giant (which merged with Chevron in 2001) spent nine years fighting to have the case moved back to Ecuador. In 2002, Chevron prevailed, as it usually has in this case; US courts ruled that the case belonged in Ecuador, but also made Chevron promise to abide by the Ecuadorian jurisdiction it had fought so hard to obtain. 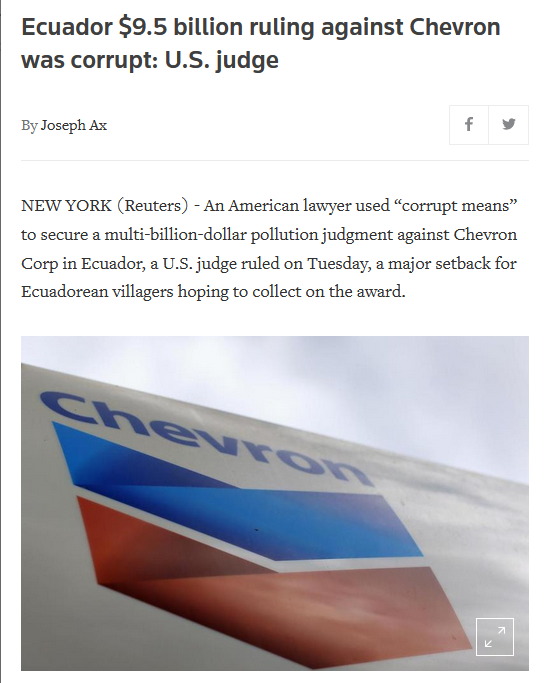 One of the many Chevron legal victories heralded by Reuters (3/4/14).

Why fight for Ecuadorian jurisdiction? Chevron’s annual revenues have ranged from $100 billion to $200 billion since 2006, depending on oil prices—often much higher than Ecuador’s entire GDP.

Chevron obviously believed it was even more likely to get its way in Ecuador than in the US, especially if it had to face a US jury, something it has always managed to avoid in this case. That speaks volumes about the kind of treatment the company expected in Ecuador, given how often US judges have ruled in its favor. Chevron’s many legal wins are documented in Reuters headlines about this case over the years.

From 1964 to 1992, Texaco dumped an estimated 16 billion gallons of toxic waste in the Ecuadorian Amazon. The CIA had played a key role in bringing the dictatorship to power in 1963 that first allowed Texaco to work in Ecuador. (Philip Agee, the great CIA whistleblower of that era, described CIA tactics in Ecuador in his 1975 book Inside the Company: CIA Diary.) In 1992, only a year before Donziger sued the company in the US, Texaco turned over ownership and control of the area to Ecuador’s state oil company.

Economic collapse in 1999 led to massive political upheaval in Ecuador; the country had seven presidents from 1996 until 2006. Under President Rafael Correa (first elected in 2006), Ecuador’s judiciary became far less subservient to multinationals. Chevron was found guilty in a provincial court in 2011. The case held up on appeals all the way to the National Court of Justice—Ecuador’s supreme court—in 2013. The victims were awarded $9 billion in damages. 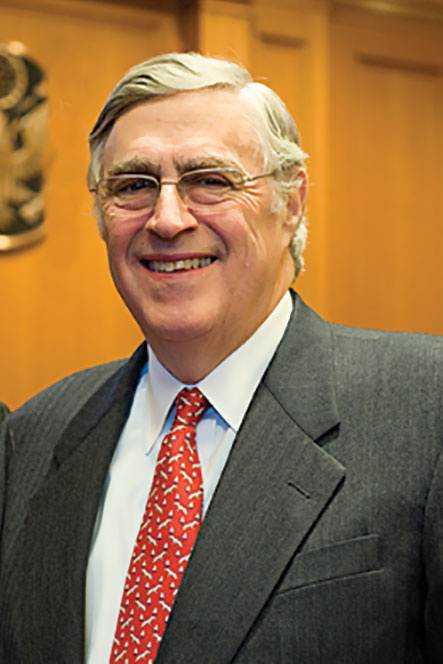 Lewis Kaplan went from defending Phillip Morris as a private attorney to defending Chevron as a state judge.

By 2011, Chevron had already come running back to the US, claiming it had been victimized by Donziger in Ecuador. New York Judge Lewis A. Kaplan—as I’ll explain—made his corporate bias remarkably clear as he presided over Chevron’s counterattack on Donziger.

The stakes were higher for Chevron than in 2002, when it finally succeeded in moving the case to Ecuador. The corporation’s unexpected defeats on its originally chosen terrain of battle changed everything. Chevron’s gloves were off—but so, too, was the mask of the whole US judiciary, not just Kaplan (who had represented the tobacco industry before becoming a judge).

Kaplan brushed aside Chevron’s promise to abide by Ecuadorian jurisdiction. In 2014, he ruled that the lower court victory in Ecuador was won by Donziger using “corrupt means.” To dismiss upper court rulings in Ecuador (and to justify telling Chevron that it didn’t have to go back to Ecuador to fight the case), Kaplan also said (on page 418 of the ruling) that he was “obliged” to pass judgment on Ecuador’s entire judiciary, and, unsurprisingly, concluded that it “was not fair or impartial and did not comport with the requirements of due process,” and was “not entitled to recognition.”

Later in the ruling (page 483), Kaplan contradicted himself, saying he did not “disrespect” Ecuador’s legal system. One Reuters article at the time (3/8/14) uncritically reported that Kaplan “carefully” said his order against Donziger does not “disrespect” Ecuador’s legal system. A bit of journalism from Reuters could have “carefully” exposed that claim as nonsense.

Kaplan’s 2014 ruling frequently quotes from a deeply personal notebook Donziger kept that included correspondence with his wife. Kaplan doesn’t quote from the personal diaries of Chevron executives, because he made sure the discovery process was applied ruthlessly to Donziger, but not to Chevron. (See pages 24–29 of this appellate brief.) Meanwhile, Kaplan allowed Chevron to drop a “sham litigation” allegation against Donziger that would have scrutinized Texaco’s environmental record in Ecuador (the essence of the legal battle since 1993) during discovery (page 48 of the appellate brief).

Despite rummaging through Donziger’s personal life, Kaplan’s ruling relies very heavily on the testimony of a defrocked Ecuadorian judge named Alberto Guerra. Chevron paid Guerra well over a million dollars worth of benefits for his testimony, but he later admitted to lying to Kaplan about being offered a bribe by Donziger, the substance of the “corruption” Kaplan used to overturn Ecuador’s ruling. In 2018, Kaplan absurdly claimed that Gueraa’s testimony was “far from indispensable” (page 12 of Kaplan’s opinion). Guerra’s name appears 13 times in the table of contents to Kaplan’s 2014 ruling alone, and an average of about once per page in the entire document.

More absurdly, and tellingly, Kaplan (page 43 of the legal brief) said during a hearing on February 8, 2011:

We are dealing here with a company of considerable importance to our economy that employs thousands all over the world, that supplies a group of commodities, gasoline, heating oil, other fuels and lubricants on which every one of us depends every single day. I don’t think there is anybody in this courtroom who wants to pull his car into a gas station to fill up and finds that there isn’t any gas there because these folks [Donziger’s clients] have attached it in Singapore or wherever else. 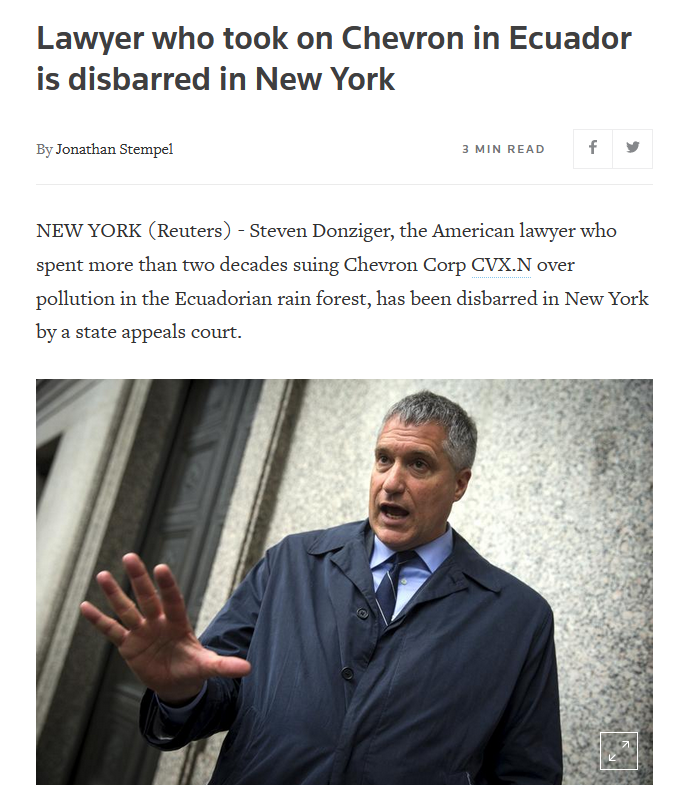 The first rule for presenting the subject of a story in an unflattering light: Make sure you get a photo of them with their mouth open (Reuters, 8/14/20).

So we are dealing here with a judge who is openly biased in support of large corporate interests, and appears disconnected from reality, if he really thinks he kept US gas stations open by protecting Chevron from Ecuadorian villagers. But he alone ruled on this case because, at the last possible moment, Chevron dropped its demand for monetary damages–thus allowing Kaplan to refuse Donziger a jury.

As for the contempt trial that Donziger now faces, the National Lawyers Guild International Committee and International Association of Democratic Lawyers (in a letter signed by over 75 organizations in May) noted, among other things, that Kaplan “bypassed the random case assignment process and handpicked Judge Loretta Preska” to rule on the contempt charges.

Judge Kaplan (a Bill Clinton appointee) has also been enabled by the wider US judiciary in his persecution of Donziger.  The appeals court that upheld his ruling in 2016 also ruled that very same month that UN troops could not be held responsible for killing 10,000 Haitians through negligence. Donziger’s law license was suspended in 2018 based on Kaplan’s ruling. A judicial referee later recommended Donziger be reinstated, but then an appeals court quickly stepped in to disbar Donziger.

If the US judiciary is filled with people who enable Kaplan, and if a jury trial is easily evaded by powerful companies, then it would be nice if one of the world’s largest news agencies would shine a critical light on his case. That never happened.

Bullies can be truth-tellers? 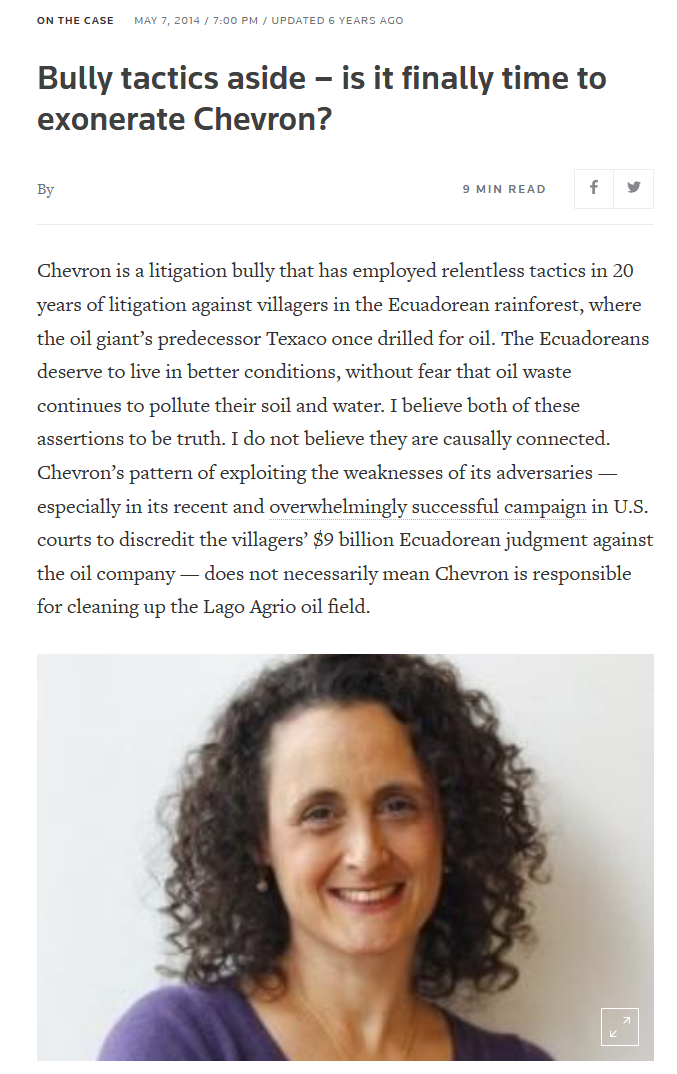 Many of the key facts I’ve just outlined above are impossible to learn by relying on Reuters’ extensive coverage—32 articles since November of 2013. None of them explained why there was no jury in the trial Kaplan presided over (because Chevron dropped its demand for monetary damages). None explained how Chevron (with Kapaln’s blessing) was able to go wild with discovery on Donziger while shielding itself from it, and never had to defend Texaco’s environmental record in Ecuador. None mentioned that a Chevron PR consultant declared internally in 2000 that the corporate “strategy is to demonize Donziger” (Intercept, 1/29/20). Only two articles (4/20/15, 12/16/15) vaguely mentioned that Chevron fought to move the case to Ecuador, but the articles did not say that this was a nearly decade-long process, or that Chevron had promised the US court that sent the case back to Ecuador that it would abide by Ecuadorian jurisdiction.

One article by Casey Sullivan (5/13/14) falsely stated that the “case traces back to 2003 when a group of Ecuadorean villagers sued Chevron” in Ecuador. An opinion piece by Reuters legal columnist Alison Frankel (5/7/14) wrote: “I’ve come to believe Donziger couldn’t make a case against the company. Sometimes, bullies are also truth-tellers.” Both Sullivan and Frankel conveniently missed that Donziger spent nearly a decade (1993 to 2002) fighting to bring his case before a US jury. Why would a company fight against that if Donziger’s case was weak?

Bullies are usually served by US judges, lawyers and corporate journalists. That’s the path a Harvard Law graduate like Donziger could easily have taken. He is being brutally punished for not taking it.

ACTION ALERT: You can send a message to Reuters here (or via Twitter: @Reuters). Please remember that respectful communication is the most effective.

Featured Image: Depiction of Steven Donziger in the Intercept (5/20/20). Protests are growing as the government of Lenín Moreno uses the pandemic to push austerity.

The post New waves of resistance against austerity in Ecuador appeared first on Toward Freedom.

A plurinational women’s parliament has become an important node of popular and Indigenous power in Ecuador.

The post Women rise against violence in Ecuador appeared first on Toward Freedom.