A superb new report from ISE associates Eleanor Finley and Aaron Vansintjan profiles many of the actions and organizations that are shaping the many varied currents of an emerging North American municipalist movement. They examine campaigns for economic democracy, municipal socialism, radical tenant organizing, mutual aid networks and the resurgence of Indigenous land defense, along with projects more explicitly linked to social ecology. A summary article can be found here, and the full report can be downloaded here.

Highlighting the need to understand municipalism in the context of settler colonialism, imperialism, and white supremacy, the authors argue that real democracy and communalism require deep reckoning with Eurocentric assumptions about land, citizenship, and participation. They also argue that, despite many difficulties and obstacles, radical municipalist experiments in the US and Canada have much to teach municipalists abroad.
They describe the unique difficulties that municipalist organizers face in the North American context:

The very institutions of local governance that municipalists rely on were weaponized as tools of segregation and gentrification. Municipal and neighborhood councils had the authority to divide schooling and housing, further excluding families of color from democratic participation and access to citizenship. To this day, neighborhood associations, school boards, and local councils in white-dominated jurisdictions are sites where racist whites viciously defend “their” town’s whiteness. Municipalists seek to empower neighborhood organizations and city councils, yet in the US and Canada, these very organizations were established through collective self-determination among whites as a means to prevent integration.

And they also point out some of the most important strategies that help point toward a promising way forward:

The framework of decolonization is appearing in a growing number of diverse contexts, such as in colonial territories like Puerto Rico, Indigenous-led anti-pipeline resistance, and Southern Black movements and cooperatives. Decolonial perspectives on municipalism are being developed in organizations like the ARIDDSE and Black Socialists in America. Social ecologist Modibo Kadalie addresses these themes in his essay collection Pan-African Social Ecology, exploring how self-emancipated Black communities along the Gullah-Geechee coasts of Georgia and South Carolina allied with Indigenous peoples in their rebellion against the fledgling United States and practiced similar forms of direct democracy—drawing not only from North American Indigenous traditions but also African traditions as well. Projects like Cooperation Jackson, the People’s Movement Assembly, and Project South are as a living inheritance of the centuries-old Southern tradition of anti-colonial resistance and self-governance. Direct democracy is thus hardly a white, European or even ancient “Greek” invention, but rather a vast realm of political practices that colonization has tried—but ultimately failed—to destroy.

The rise of eco-fascism has led to some of the worst far-right lone wolf terror attacks in recent years. From the Christchurch and El Paso massacres, eco-fascist philosophy has played a key, if not the central, motivation for these attacks.

An often overlooked and unforeseen consequence of the worsening climate crisis is the further radicalising effect it is having among young people on the far-right, giving their xenophobia, racist and fascist beliefs a greater ecological impetus. Consequently, this is proving to have horrendous real world consequences for people of colour, ethnic and religious minorities who are the target of these eco-fascist terror attacks.

Thus, this article calls for governments at COP26 to realise how decades of ineffective climate change measures has led to the growth of this ideology. It is therefore imperative that governments take accountability for the consequences of previous inaction by pursuing an international effort to halt eco-fascist radicalisation. 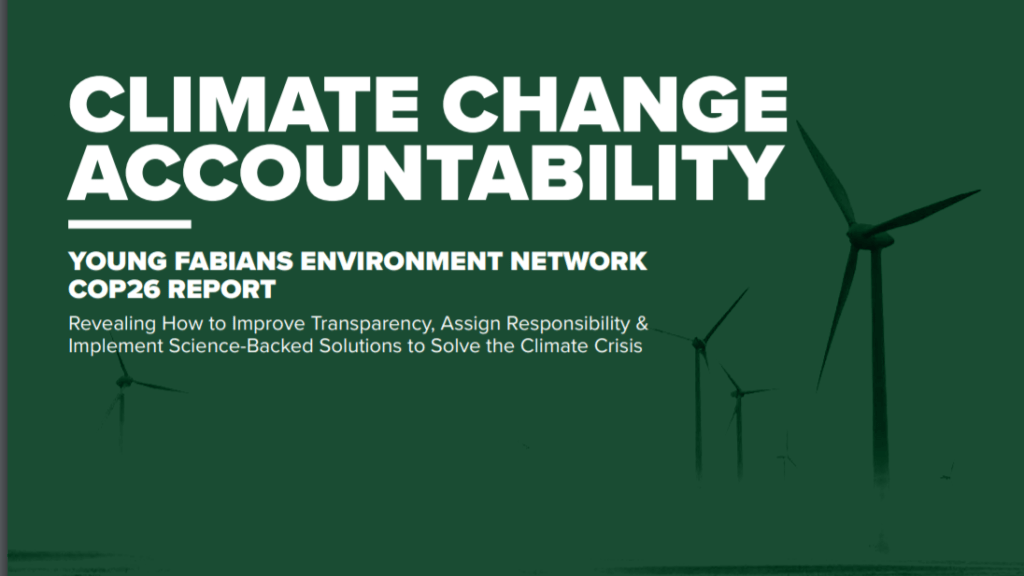 This collective effort must take the form of targeted action against fascist networks on social media, which has become the primary facilitator of far-right radicalisation. With current social media platforms all too easily allowing eco-fascists to communicate, disseminate propaganda and radicalise others. Therefore the article calls for governments at COP26 to embrace;

This article features in the Young Fabians Environment Network’s Cop26 Report, titled ‘Climate Change Accountability’. The Young Fabians Environment Network is the environmental youth wing of the Fabian Society, a socialist think tank established in 1884, which is affiliated with the UK Labour party. The report features articles written by members concerning ways to improve transparency, responsibility and accountability at the next COP26 UN climate change conference in Glasgow, in an effort to help solve the climate crisis. A link to the article, and a full report can be found here.

The post The Rise of Eco-Fascism: The Environmental Case for Taking a Tougher Stance Against Online Hate appeared first on Institute for Social Ecology.