Now that Biden and Harris have won a decisive victory, not only in the popular vote but also in the electoral college, it is more important than ever for workers and their organizations to remain vigilant and not de-mobilize while making sure every vote is counted.

Part 1: The Name of the Game Is Class Struggle

It’s no secret that, over the last 40 years, income inequality has soared in the United States.

In the late 1970s, the top 10 percent of the U.S. population, ranked by income, received about one-third of total U.S. income. They now receive about half of total income. 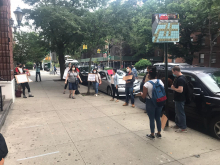 Last Friday, when New York City educators were supposed to be in their third day of “professional development” held inside school buildings, teachers and other staffers at a Queens middle school, IS 230, took their work outside.

Sitting in chairs and on the concrete with their laptops, they refused to enter the school building after they learned that one of their co-workers had tested positive for COVID-19. Union officials were notified Thursday and immediately informed members. The city didn’t notify them till Friday.

The Black Lives Matter uprising has prompted strong statements about racism and police accountability from top union officials, but the participation of the labor movement has been limited. Several internationals have, to their credit, encouraged their members.

More of the initiative to take action has come from below, with local unions and rank and filers organizing or participating in local demonstrations, pushing local governments and schools to shift resources from policing to community needs, and confronting racism in their own workplaces and industries.

A strike by 33 workers at a McDonald’s in North Oakland has shut down the store since May 26. Twelve workers there have tested positive for COVID-19, and so have eight of their family members, including a 10-month-old baby. This is one of the longest recorded strikes ever by McDonald’s workers.

On Sunday, postal workers in Minneapolis organized a display of solidarity with the Black freedom movement that is emerging after the brutal police murder of George Floyd.

A few co-workers and I planned a rally at the burned-out Lake Street post office and a march from there to the memorial site for Floyd. We thought it was important to show the world where we stood, because city hall and Governor Tim Walz have used the destruction of buildings—including two post offices—as a justification to mobilize the National Guard to suppress the protests.

For five days in 1919, union members took control of the city of Seattle. They arguably ran it better, and certainly more justly, than it had ever been run before.

The strike began when waitresses, laundry workers, streetcar workers, and more—65,000 union workers in all—walked off the job on February 6, 1919, to support striking shipyard workers.

The organized labor movement has begun swinging into action to support protests against the racist police murder of Minneapolis resident George Floyd.

Floyd was filmed being suffocated to death under the knee of police officer Derek Chauvin on Monday in a video that reverberated around the country and has sent the Twin Cities into turmoil.

Protesters lit shops and even a police precinct on fire on Thursday as public rage boiled over in Minneapolis’s third precinct over the ever-continuing string of police murders of Black people in the United States.