The demands are clear: defund and abolish police. As those calls grow, so will efforts by reformers to propose new rules and regulations that they say will “improve” and restore “legitimacy” to policing. These bureaucratic reforms reflect the failed thinking that built up the carceral state, and they will make policing harder to dismantle. Reforms like this are meant to pacify social movements, replacing community self-determination with the “expertise” of lawyers, academics, and other professionals who are complicit in oppression.

Bureaucratic reforms are not just too little. They are also dangerous. Decades of judicial oversight, transparency legislation, and self-auditing requirements have not reduced the power of the carceral state. To the contrary, they have created a vast punishment bureaucracy giving political legitimacy and social inertia to a system of mass caging rooted in enslavement. Applying this same regulatory framework to the governance of policing will only expand the reach and harm of policing, just as it has helped to make the prison-industrial complex bigger, harsher, more durable, and racist as ever.

The chief proponents of police bureaucracy are typically professionals whose authority depends on working closely with the carceral state. Consider the recent L.A. Times op-ed by University of Texas professor Sarah Brayne, “One way to shrink the LAPD’s budget: Cut costly and invasive big-data policing.” Brayne spent years embedded within the Los Angeles Police Department as a doctoral student at Princeton. Despite the op-ed’s title, it never proposes reducing let alone “cutting” any police surveillance. Instead Brayne writes about the “secrecy” that “shrouds” LAPD’s data systems. She notes that New York City recently required “the NYPD to disclose which technology it uses and what data it collects.” She proposes that “Los Angeles should follow suit.”

Brayne asserts that “surveillance technologies are largely missing from today’s urgent conversations.” That voice is “missing” only if one ignores local activists. Here in Los Angeles, the Stop LAPD Spying Coalition has fought to dismantle LAPD surveillance since 2011, recently forcing LAPD to end its LASER, Chronic Offender, and PredPol surveillance programs. An abolitionist organization, Stop LAPD Spying has also organized against laws like the one Brayne proposes importing from New York. That law, named the POST Act, tasks the NYPD with writing “surveillance impact and use policies” to post on their website, where the public has 45 days to comment. While police are asked to “consider” the comments, NYPD is not required to make changes or to share the information that underlies their conclusions, which will be framed by NYPD’s army of lawyers.

These laws are also often coupled with efforts to limit use of a particular surveillance technology, like the restrictions on facial recognition enacted by San Francisco and the recently proposed Facial Recognition and Biometric Technology Moratorium Act, introduced by Senator Ed Markey and others this June. Explaining the bill, Markey acknowledged calls “to dismantle the systematic racism that permeates every part of our society” and noted that face recognition “physically endangers Black Americans.” But at the same time that his bill seeks to freeze police use of face surveillance, it outlines details of the regulatory scheme that Congress would enact to end the moratorium, including “auditing requirements,” “standards for use and management,” and “minimum accuracy rates.”

The idea behind these reforms is that policing can be tamed through paperwork and rules. This whitewashes the harm of surveillance, which will be used for racial domination no matter if it is lawful or unlawful, no matter if “accurate.” The politicians and lawyers behind the POST Act last month celebrated their “tremendous” and “vital” victory. But the truth is that legislation like this is the easiest possible win in this moment, betraying the bolder visions of the mass movement calling to abolish police.

No one is taking to the streets facing down tear gas to demand police bureaucracy. To the contrary, today’s protests originate in the failure of past reforms, which have done little to end policing’s death toll. These protests have made police abolition a serious conversation. Whether and how legislation can be abolitionist are important questions. But if legislation is a goal, that power should be used to ban particular forms of surveillance, not just create a bureaucracy to regulate them. Calls for surveillance oversight ignore the lessons of past struggles against federal national security surveillance and Red Squad repression, which led to the creation of bureaucracies like the Foreign Intelligence Surveillance Court and the NYPD’s Handschu guidelines. Rather than dismantling policing, reforms like this help police adapt to criticism, to reinvent and rebuild.

When the POST Act was enacted, the Stop LAPD Spying Coalition criticized the reform as “surveillance bureaucracy” and observed that laws like this presume “that our communities want to be surveilled, so long as the state follows a heavily stacked process, pretends to consider input, and checks off a few baseline legal requirements.” At the time, it may have appeared odd for activists from Los Angeles to criticize local legislation in another state. But Stop LAPD Spying observed that the “national uprising against police terror will be used to force similar reforms across the country.” We are seeing that now.

To be sure, this isn’t the first time a reformer who worked closely with police has proposed surveillance bureaucracy laws for Los Angeles. In 2015 the ACLU’s local Director of Police Practices sent a proposal for a similar local law that he had drafted to an LAPD deputy chief, asking “if you have any concerns with any of the provisions that are in here” and inviting ideas for “provisions you think should be in here but aren’t.” The ACLU later pushed a statewide version of similar legislation. An ACLU press release announced that the bill would offer “a seat at the table” and foster “public debate” to build community assent for surveillance.

This relates to the deeper issue with reforms like the POST Act, reflected both in who is advancing these proposals and in what these laws will create. Reform like this is pacification: it takes power away from the people, directing opposition into a bureaucratic process that marginalizes community voices, while elevating voices that support police or – at most – compromise with them. And at the end of the day, these reforms allow police to say that the community “controls” surveillance (“community control” is even in the title of the ACLU’s model surveillance bureaucracy legislation, curiously named CCOPS) when the truth is that police set the agenda and violently hold the power. After securing “public” approval, police continue their harm with a claim of legitimacy. This is nothing like abolition. It’s not even de-policing, reducing the scope of what police do. It’s police preservation.

Abolition is decolonization. More than just ending policing and prisons, it’s a practice of building a new world. Those institutions are weapons of settler colonialism and racial capitalism, but they aren’t the only ones. Abolition requires dismantling all the weapons made using those ideologies. It requires dismantling universities, which colonize and hoard knowledge while credentialing experts who work to maintain oppression. It requires ending imperialism, whose wars, borders, and extraction are police violence on a planetary scale. And it requires dismantling the legal bureaucracies that legitimate and sustain a system of mass torture and killing.

Far more than dismantling and defunding though, abolition requires building the autonomy and self-determination that the carceral state denies. This begins with advancing the political vision of those who policing harms. Academics like Brayne aren’t the only people with ideas about how to address the harm of surveillance in Los Angeles. Brayne is using her authority to argue against the views of movement organizers who are working to dismantle LAPD surveillance. No matter her intentions, Brayne’s expertise comes from riding around in police cars and helicopters, shadowing police as they hunted people. In contrast, grassroots organizers speak from working to empower the communities harmed by policing.

Academics and lawyers don’t need to get in the way of liberation. Instead of solely thinking about social problems, they can think with movements struggling to transcend those problems. They can defer to the deep expertise of communities marginalized by the state and participate in the daily work of building political power, advancing self-determination, and dismantling oppressive structures. They can amplify community leadership in an effort to ensure lasting social change, contributing their “expertise” to collective liberation rather than being another cog in the technocratic management and bureaucratic rationalization of structural violence.

The positive task of surveillance abolition – building a world without mass suspicion and supervision – poses questions that need deep attention. Surveillance extends beyond the hard social control and violence of police and prisons. “Surveillance,” writes Simone Browne, “is the fact of antiblackness.” Its purpose is to harm communities and administer an oppressive social order. Rather than settling for “community control” of this violence, communities that are resisting surveillance from the perspective of liberation are creating a new historical horizon, where at first light these important questions can be confronted and then in the fuller light of a new day can help new ways of life built around democratic self-administration to bloom. Advocating for reforms like the POST Act keeps us lost in the darkness of our present condition.

Abolitionists have long known that the purpose of policing is to violently maintain an oppressive social order. New rules and criteria will not end that violence. Instead, they will just lead police to invest more resources and expertise into monitoring and avoiding compliance with the latest rules. This will make our system of mass suspicion, incarceration, and banishment harder to dismantle. If academics and lawyers wish to play a role in advancing liberation, they need a radically different approach to expertise as well as deference to those working to build a world without policing. Reforms that build police bureaucracy go in the opposite direction, placing more authority in elite hands and giving police new footing to expand their violence.

The post Police Bureaucracy and Abolition: Why Reforms Driven by Professionals will Renew State Oppression appeared first on CounterPunch.org. 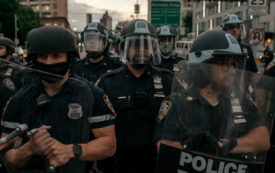 Activists from Seattle to New York argue that elected boards and special prosecutors are vital to addressing police violence.

The post For ‘Police Accountability With Teeth,’ Citizens Demand Elected and Empowered Oversight Boards appeared first on The Nation. 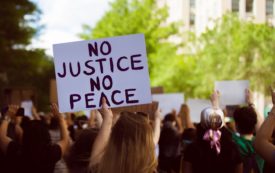 The post Even in the Darkest Days of Trump’s Misrule, Hope Is Still Alive appeared first on The Nation.