Archive for category: THE NEW REPUBLIC 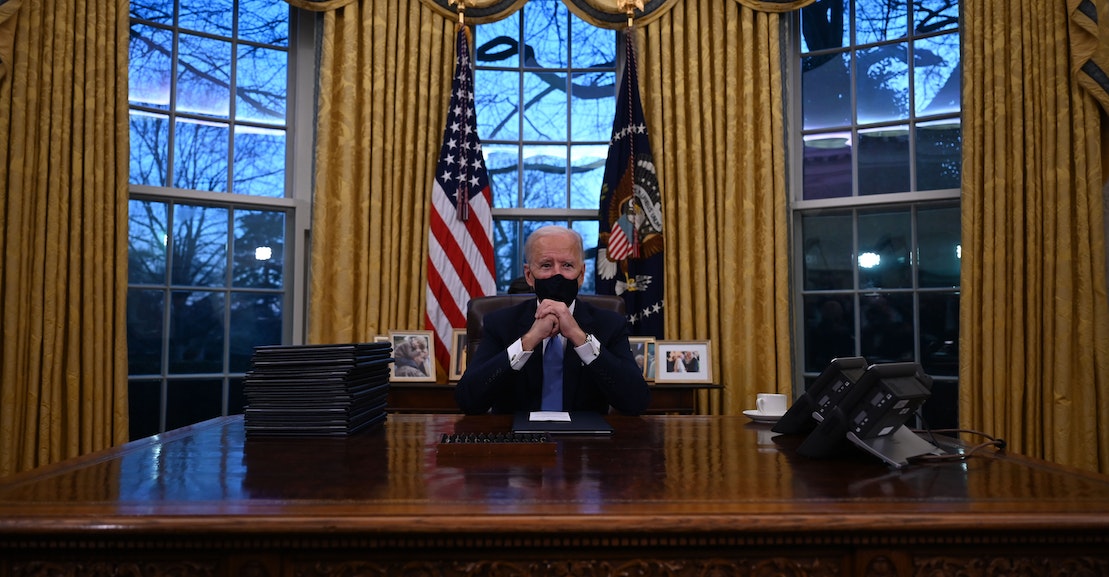 The 2022 election is the most important one of our lifetimes. That is, if you believe in a democratic republic, given the GOP’s embrace of autocracy, as shown by a recent CBS poll that found that a majority of Republicans now justify the January 6 attack as an act “defending freedom.”

There’s another recent poll number that’s even more troubling. President Biden’s sizable drop among Democrats is such a concern because if the Democratic base doesn’t come out in 2022, it could spell more than simply losses for Democrats—it could usher in the loss of our democracy.

Presidents’ approval numbers typically drop after the honeymoon period. Consequently, it’s not surprising that Biden’s approval ratings have slid since mid-2021 from the neighborhood of a solid 52 percent to about 43 percent per the recent average of polls at FiveThirtyEight. He’s had a pretty brutal few months.

But it’s his drop in support among Democrats that’s deeply alarming, since in off-year elections, the base coming out is the key to winning—or losing. As recently as June, Biden still had a remarkable 95 percent approval rating from Democrats per Gallup’s monthly polling. But take a look at the Gallup’s most recent poll in December: Biden’s approval among Democrats fell to 78 percent. That’s nearly a 20-point drop in six months, while his overall approval rating had only fallen in that same period by a little over 10 points—from mid-50s to 43 percent.

Worse, a new IBD/TPP poll released earlier this week found Biden’s approval among Democrats had slipped to 74 percent—down from 76 percent the prior month in that same poll. Why the drop? That’s the key question for Biden to try to address before November.

Issues like Covid-19, inflation, supply chains, etc., all weigh on Democrats like the rest of the nation. The mess in the schools, with new closings happening, has to be a culprit. But in my recent conversations with people who call my progressive political show on SiriusXM Radio, not one person ever raised those issues when they expressed their loss of enthusiasm or frustration with Biden. The two issues that came up repeatedly—and they are intertwined—were: 1) Biden’s failure for the past year in not displaying the “fierce urgency of now” in holding Trump accountable for his crimes; and 2) his not fiercely opposing the threat today’s GOP poses to our democracy. (The only other issue raised by some has been Biden’s failure to cancel student loan debt.)

As to holding Trump accountable for his crimes, no Democrat called my show and starting chanting, “Lock him up.” It’s more a sense of outrage and utter bewilderment that Trump could incite an attack on our Capitol in front of our eyes—from radicalizing supporters with lies about the election to repeatedly summoning them to Washington on January 6 with the promise it would be “wild” to literally directing them before the attack to head to the Capitol to “stop the steal”—and yet he’s not charged for his crimes.

Democrats want Biden to call for justice the same way, as a nation, we called for justice for all involved in 9/11. Calling for a person involved in a terrorist attack on our Capitol to be prosecuted is not partisanship. It’s patriotism.

Second, my callers are equally outraged that the GOP has been setting the stage for rigging elections—also right in front of our eyes—for a year. Yet all we got from Biden was one speech in July, before Tuesday’s voting rights speech in Atlanta. Biden should have made this an issue at least on par with his Build Back Better bill.

The words I have heard from my audience in response to Biden’s inaction on these issues range from, “Why did we elect him if he won’t hold Trump accountable?!” to “People have died for the right to vote, and if Biden won’t make that a priority, why should I make voting in 2022 a priority?” Many have spoken of potentially sitting out the 2022 election.

GOP leaders are great at giving “red meat” to their base. Trump was probably the best at that, serving up all the white supremacy, bigotry, and science denial the GOP base craves. That helps explain why Trump’s approval rating among GOP voters—per Gallup—was consistently in the high 80s and even as high as 94–95 percent several years into his train-wreck presidency, even after Covid-19 hit.

Biden needs to give red meat to liberals and progressives to excite and animate us for 2022. Our red meat, though, is far different from the rancid version served up by the GOP. It’s fighting daily for a foundational principle of our republic, namely protecting our democracy by holding Trump accountable for his attack on it and protecting voting rights. A few speeches won’t do it. Biden must have a concerted plan to elevate these issues, coupled with action.

For example, Biden could travel the nation with a “Saving Our Democracy” tour, using every tool available to publicly pressure Democratic senators who won’t agree to reforming the filibuster to pass voting rights, prepare executive orders on voting rights, and other measures. Plus—if need be—he could replace Merrick Garland with a more aggressive attorney general.

I’m not saying Biden should be quaking in fear, but he needs to listen to the Democratic base and act. If not, the 2022 election could not only be terrible for Democrats, it could be devastating for our democracy.