It’s looking to be a hot summer for just about everyone in the United States. And there’s not much hope for rain to ease the heat. That’s according to the latest forecast from the National Oceanic and Atmospheric Administration’s climate scientists, released Thursday.

From June to August, unusually hot temperatures are expected across all 50 states, particularly the Southwest and Northeast. Much of the country is also expected to have a dry summer.

“Typically La Niña favors warmer than normal conditions over much of the West,” said NOAA meteorologist Johnna Infanti, referring to the climate pattern currently influencing weather in the U.S. It involves cooler sea surface temperatures and strong east-to-west winds in the Pacific Ocean, and it affects weather around the globe.

NOAA’s forecast offers little relief to the West, an area gripped by a 22-year-long megadrought, estimated to be the worst in 1,200 years. Scientists noted that California just had its driest January to April on record, with 3.25 inches of rain. That same period was the third-driest yet for Nevada and Utah. While forecasters expect these conditions to persist, the drought also appears poised to crawl east, with most of Iowa and eastern Texas likely to develop drought conditions this summer.

Extended drought has states worried, since it ratchets up their wildfire risk. Fires have already scorched New Mexico this month, weeks before the fire season peaks in June. Scott Overpeck, a meteorologist for the National Weather Service in Albuquerque, told the Guardian, “We have been seeing the writing on the wall, in the sense that we know with the drought conditions that it is going to be a rough season.”

Prospects for a hot, dry summer also have the people who operate electric grids concerned. This week, the North American Electric Reliability Corp., known as NERC, which monitors the grid across the U.S. and Canada, issued a sober assessment for the season, underscoring the challenges of keeping the power running against the backdrop of extreme weather driven by climate change. As temperatures spike, demand for electricity soars as people turn on their air conditioning. But with drought crippling hydropower generation, there’s less available power to meet demand.

That means an unreliable grid. When there isn’t enough power, operators set off outages, rolling blackouts, to avoid long-term damage to the grid. About two-thirds of the U.S. is vulnerable to a shaky supply this summer, according to the NERC assessment. During extreme events, like the Pacific Northwest’s heat wave last year, when temperatures set new records for three days straight, that can be lethal. Washington state alone estimates that 100 people died from the heat wave alone last summer, making it the deadliest weather-related event in state history.

The highest risks are in the upper Midwest and southern states directly east of the Mississippi River. There, NERC’s report said, retiring power plants, climbing demand, and low winds strain the power supply. Plus, an important transmission line running from Illinois to Arkansas that was damaged by a tornado last December is still out of service. Elsewhere, drought in Missouri River Basin states hampers the gas, coal, and nuclear plants that use river water to stay cool.

The East Coast will likely get an early taste of summer heat this weekend: A heat wave bringing the hottest temperatures since last August is expected to bake states from North Carolina to Maine. If that’s not enough to worry about, the grid watchdog identified two more hurdles this summer: supply chain woes that slow major transmission projects and the possibility of Russian cyberattacks.

This story was originally published by Grist with the headline Summer forecast: Extreme heat with a chance of rolling blackouts on May 20, 2022.

Read more
A primary night moment with one of Trump nation’s most aggressive ‘Big Lie’ conspiracy theorists went viral online thanks to Democrats raising alarm bells about what a Republican victory for governor in Pennsylvania might mean for the future of the American Experiment.
Read more
Global right opens Budapest gathering, vilifies media and vows left will be “exposed, demonized and crushed”
Read more
The solution to “great replacement” paranoia is to simply force women to give birth against their will
Read more 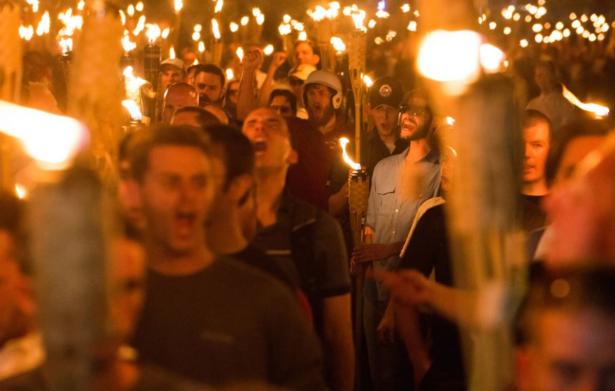 Read more
“Russia’s invasion of Ukraine must be condemned,” says one activist. “But the administration has been telegraphing for weeks that its war aims now go well beyond defending Ukraine.”
Read more
In the past, Massie has also voted against funding for Holocaust education
Read more On May 17, Patriarch Kirill of Moscow addressed the upper house of the Russian Parliament…

A historical look at how anarchists in the 1990s mobilized against attacks on reproductive freedom and autonomy by taking direct action and building autonomous infrastructure.

As the Supreme Court prepares to reverse Roe v. Wade under a Democratic president, house, and senate, it is clear that action at the ballot box is insufficient to protect abortion. Reproductive rights were not won by electoral means, and that is not how we will defend them.

Anarcha-feminist traditions of grassroots struggle and autonomous abortion infrastructure offer alternative strategies. As the anarcha-feminist Liz Highleyman put it in 1992, “the day when abortion is again made illegal may come sooner than we like to think. We must be ready to take our bodies and our lives into our own hands.”

Anarcha-feminists were on the front lines of the struggle for abortion throughout the 1980s and ‘90s. They were convinced that Roe v. Wade would not last forever and that they could not depend on the state and the legal system to protect reproductive freedom. Anarcha-feminists took a three-pronged approach to abortion struggle: defense of abortion clinics, construction of grassroots reproductive health infrastructure, and an anti-state approach to building feminist dual power.

Anarcha-feminists physically protected abortion clinics from the likes of Operation Rescue, which was formed in 1986 to act as anti-abortion shock troops. They assaulted abortion clinics and supported bombings and assassinations of abortion providers using the slogan “if you believe abortion is murder, act like it’s murder.”

Broad feminist and queer coalitions mobilized against Operation Rescue. Anarcha-feminists introduced black bloc tactics and a willingness to engage in physical confrontation. They used these confrontational tactics to successfully protect clinics in NYC, Minneapolis, San Francisco, and across the country.

When Operation Rescue attempted to host a summer training camp in Minneapolis in 1993, anarchists physically confronted them, blocked them in their church, disrupted their meetings, vandalized their materials, protected clinics from their attacks, and generally made them unwelcome. Although some liberals opposed these tactics, anarchists and other militants handed Operation Rescue a major defeat and ran them out of town.

Reflecting on the experience, a local anarchist named Liza wrote that “it seems like no matter how hard activists fight, we rarely win. Except this time we were victorious. We fought against these fascists … We saw the demise of Operation Rescue in the Twin Cities, partly due to our unprecedented aggressiveness and opposition, and partly because their movement is losing, big time.” 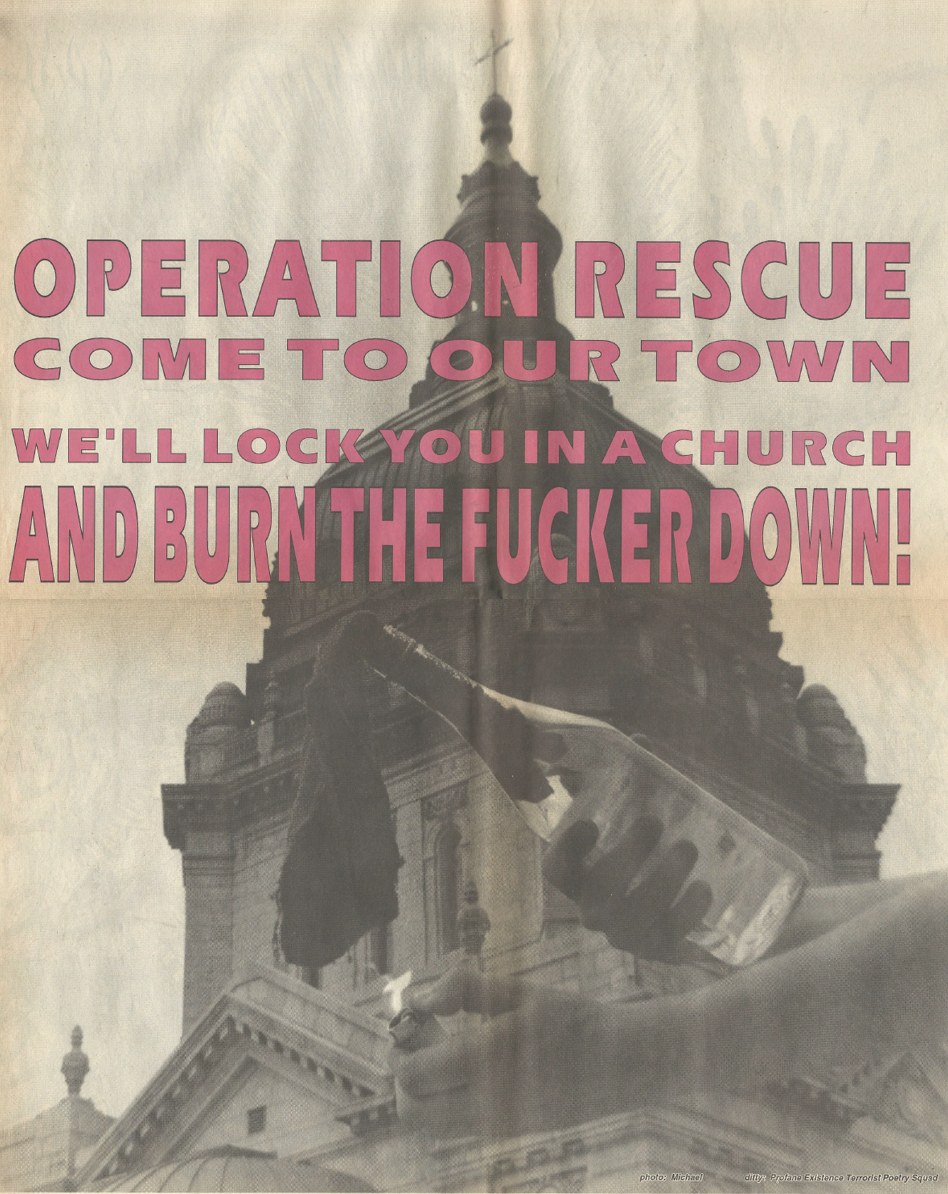 Anarcha-feminists established autonomous infrastructure and self-help groups in which people learned to take care of their own bodies and induce abortions on their own terms. As one anarchist put it in a 1991 article, “medicine is something we must take into our own hands. Because how can you smash the state if you’re still walking funny from a visit to the gynecologist’s?”

Threats to legal abortion produced an urgent need, as Highleyman wrote in 1992, to “rebuild the network of feminist women’s health and reproductive resources that existed in the late 1960’s and early 1970’s.” Anarchists called for the revival of groups like the Chicago Jane Collective that provided over ten thousand underground abortions before they were legalized. While anarcha-feminists supported abortions provided by accredited doctors, their focus on women’s autonomy led them to draw on alternative traditions of women-controlled health practices. This includes herbal and holistic methods which women have used “throughout the ages … to control their fertility and reproduction.”

Anarchists advocated expanding grassroots infrastructure and self-organization to gain the knowledge and skills necessary to perform their own reproductive care. They argued that this would produce true reproductive freedom and autonomy that was independent of the state and its laws.

Anarcha-feminists did not appeal to the state to maintain abortion rights. They believed that the state was inherently patriarchal and was ultimately the enemy of reproductive justice. Thus, the Love and Rage Revolutionary Anarchist Federation (1989-98) argued in its draft political statement that “our freedom will not come through the passage of yet more laws but through the building of communities strong enough to defend themselves against anti-choice and anti-queer terror, rape, battery, child abuse and police harassment.”

Anarchists supported struggles to maintain legal abortion but argued that we must be ready to act on our own terms in the fight for bodily autonomy and self-determination. Establishing reproductive healthcare infrastructure is a key component of feminist dual power that challenges the hegemony of the state and capitalism. This kind of infrastructure prefigures—and concretely establishes—a world defined by mutual aid, solidarity, and autonomy.

As Sunshine Smith remarked in 1990, forming self-help medical groups and abortion infrastructure in the Bay Area “has, in very concrete ways, made our struggle against the anti-abortion group Operation ‘Rescue’ and the ‘Supreme’ Court stronger and more effective. We have learned that if the time comes, we can and will do home abortions. We are becoming physically aware of the invasion the government is conducting into our bodies. We are now able to repulse the state from our uteri because we are gaining the knowledge that enables us to control our own bodies.”

On Thursday, the three leaders of Black Lives Matter Global Network Foundation addressed the controversy that has surrounded the organization over the last month. When it was revealed in April by New York Magazine that BLM founder Patrisse Cullors secretly purchased a $5.8 million mansion in Southern California,…